Who’s to blame for Cebu slide? 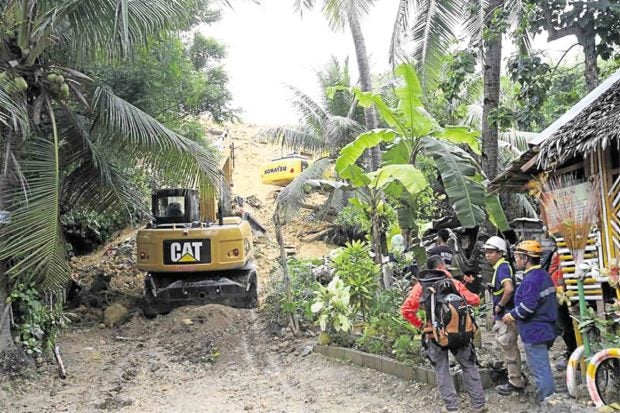 SEARCH Heavy equipment arrive at Barangay Tinaan in Naga City, Cebu province, to speed up the search for victims of the landslide that hit the community on Sept. 20.

CEBU CITY — Two days before the Sept. 20 landslide in Naga City, southern Cebu, officers of the Mines and Geosciences Bureau in Central Visayas (MGB 7) recommended the forced evacuation of all residents at Sitio Tagaytay in Barangay Tinaan due to cracks seen on the mountain.

People in the community located in the upper slopes of Tinaan obliged and relocated to safer grounds, said lawyer Gerardo Mahusay, MGB 7 finance and administration chief.

But the massive landslide did not spare residents of Sitio Sindulan located at the foot of mountain.

Mahusay said MGB 7 did not recommend the forced evacuation of residents at Sitio Sindulan since the place was not among those surveyed and investigated by their geologists.

“We only conducted an investigation at Sitio Tagaytay because it was what the Naga City government requested,” he said.

A massive landslide hit Sitio Sindulan in Barangay Tinaan, wiping out houses there. As of noon Tuesday, 66 bodies had been pulled out by teams conducting search and rescue operations round-the-clock.

Local officials as well as the residents blamed the quarry operations of a cement firm at Sitio Tagaytay, located above Sitio Sindulan, for the landslide.

According to Mahusay, MGB 7 conducted the investigation at Sitio Tagaytay on Sept. 18 on the request of Naga Mayor Kristine Vanessa Chiong, who received reports from residents regarding cracks on the mountain.

He said they found out that a major crack was seen beside the tower of the National Grid Corp. of the Philippines at Sitio Tagaytay where Apo Land and Quarry Corp. had been reportedly conducting quarry operations.

Mahusay said the bureau recommended to the city government to immediately implement a forced evacuation of residents at Sitio Tagaytay.

On Sept. 19, geologists Jerali Rodrigo and Dennis Gerald Aleta and chief geologist Al Emil Berador recommended to MGB 7 Director Loreto Alburo the forced evacuation of all residents at Sitio Tagaytay and for the continuous monitoring of the ground cracks.

The memorandum was supposed to be sent to the Naga government on Sept. 20 when the landslide struck.

On Aug. 28, Chiong said she received complaints from residents regarding the presence of cracks on the mountains of Tinaan. “I issued a cease and desist order for Apo Land to immediately stop its quarry operations in the place,” she said.

Since the local government had no geologists, Chiong said she requested MGB 7 to conduct an inspection and technical assessment on the reported cracks.

MGB 7 later reported that the cracks were “attributable to natural phenomenon and not related to mining operation” by Apo Land, and that those “did not pose imminent danger to the neighboring community.”

After receiving the MGB report, Chiong said she lifted the cease and desist order. But she said she required Apo Land to continue monitoring the cracks and fissures on the quarry site and neighboring areas.

On Sept. 11, Apo Land submitted a report to Chiong about the growing cracks in the area. Chiong said she subsequently asked MGB 7 to reevaluate the area and conduct an immediate joint technical assessment and inspection.

She said she then ordered Apo Land to stop its quarry activities in the areas.

The company and the city government decided to relocate nine households in the area. But 13 other families refused to leave.

“However, it is not time to pinpoint as to who is at fault. As the mayor, I’m accountable to the people of Naga City. That remains today until the end of my tenure,” Chiong said.