newsinfo / Nation
Nation
PRESSURING A CRITIC OF THE ADMINISTRATION 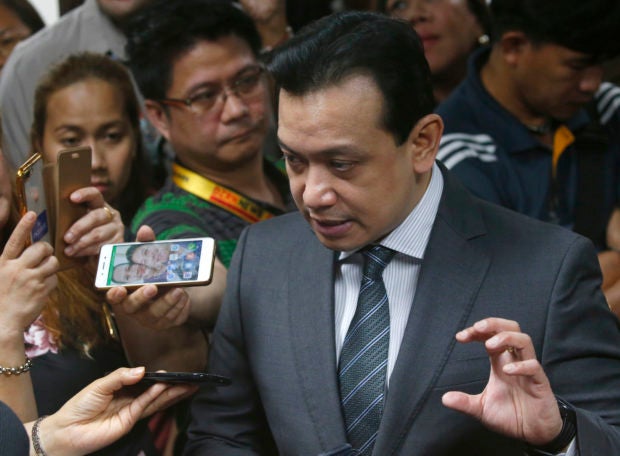 Oppositionist Sen. Antonio Trillanes IV talks to journalists outside his office in the Senate following the issuance of an arrest order by the Makati Regional Trial Court on Tuesday, Sept. 25, 2018. Trillanes who remained holed up in his office for three weeks now after President Rodrigo Duterte voided an amnesty given to the former rebel military officer, willingly went with police to post bail. (Photo by BULLIT MARQUEZ / AP)

Although he respects the arrest order issued on Sen. Antonio Trillanes IV, Sen. Francis Pangilinan disagrees with it, saying it was a way of harassing a critic of the Duterte administration.

[It’s clear that this is an act of the administration to harass one of its critics.]

Earlier in the day, Judge Elmo Alameda of Branch 150 of the Makati City Regional Trial Court ordered the arrest of Trillanes in relation with his involvement in the 2007 Manila Peninsula siege.

Alameda issued the order three weeks after President Rodrigo Duterte issued Proclamation No. 572 revoking the amnesty given to Trillanes in 2010 by then President Benigno Aquino III.

“While we respect the Court order, we disagree with it,” Pangilinan said in statement on Tuesday.

He also denounced the President’s order revoking Trillanes’ amnesty, saying it was “illegal” and “an abuse of presidential powers.”

“It is as clear as day that the revocation of grant of amnesty is illegal and an abuse of presidential powers and must be vigorously opposed,” Pangilinan said.

He also noted the efforts of Trillanes in submitting pieces of evidence to prove his amnesty application was valid.

“All the pieces of evidence submitted to the Court both documentary and testimonial prove a valid application and amnesty proclamation,” Pangilinan said. /atm