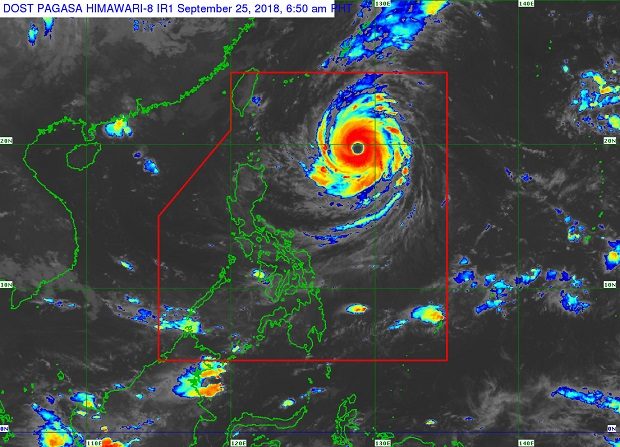 Typhoon ‘Paeng’ (red swirl, above center) has been classified by the Joint Typhoon Warning Center in Hawaii as a super typhoon. PAGASA IMAGE

It is packing 259 kilometers per hour maximum sustained winds and gusts of up to 314 kph.

But the Philippine Atmospheric, Geophysical and Astronomical Services Administration continued to categorize Paeng as a typhoon. JTWC measures the average wind strength per 1 minute, while Pagasa measures average winds every 10 minutes.

Paeng packed maximum sustained winds of up to 200 kph with gusts of up to 245 kph.  It was moving at a slow pace of 10 kph west northwest, Pagasa said.

The typhoon was spotted 740 kilometers east of Basco, Batanes.

More than a week ago, the JTWC also classified “Ompong” (“Mangkhut”) as a super typhoon.

Ompong battered the northern Philippines with heavy rain and strong winds, leaving at least a hundred people dead and about P18-billion in damage to agriculture and infrastructure.

Ariel Rojas of Pagasa said there was “no significant enhancement” of the southwest monsoon from Paeng. Light to moderate rain is expected over Northern Luzon on Friday.

The typhoon is not expected to make landfall in the Philippines. /cbb