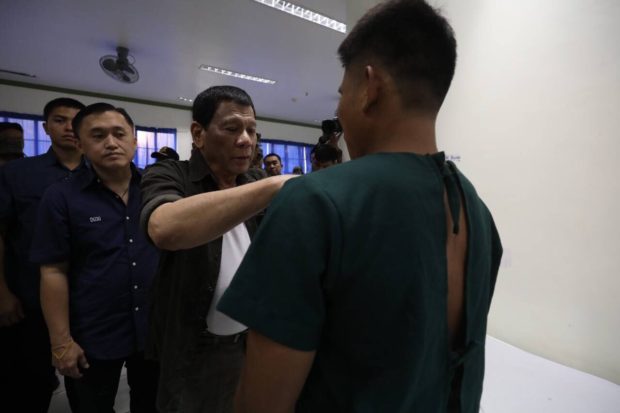 ZAMBOANGA CITY – President Rodrigo Duterte on Monday visited and gave recognition to the 17 Scout Rangers, who were wounded in an encounter with alleged Abu Sayyaf members in Patikul, Sulu last September 14.

Duterte arrived in Jolo, Sulu at past 5 p.m., the military said.

The President’s visit would be strictly for military affairs, officials said.

Besana said however that what they know so far is that the President “will give recognition to the 17 wounded soldiers during the September 14 encounter in Patikul.”

Seventeen Scout Rangers were wounded from the skirmish – all incurring minor shrapnel wounds and confined at the Camp Gen Bautista Hospital in Bus-bus, Jolo.

According to the military, the rangers were on focus military operation to get Radullan Sahiron and his sub-leaders Hajan Sawadjaan and Idang Susukan at the vicinity of Barangay Bakong.

The military delivered 60 and 81 mm mortar fires during the operation.

Seven alleged members of the Abu Sayyaf were killed during the mission. But their respective families claimed they were all innocent fruit harvesters.

The rangers reportedly recovered one M16 rifle from the slain suspects.

Family and relatives of the suspects however said the seven were fruit harvesters arrested by the Scout Rangers in Sitio Sungkug in Barangay Kabuntakas in Patikul.

They claimed the fruit harvesters sought permission from the 45th IB in Barangay Igasan in Patikul to collect fruits in Sitio Tubig Bato, Barangay Kabuntakas.