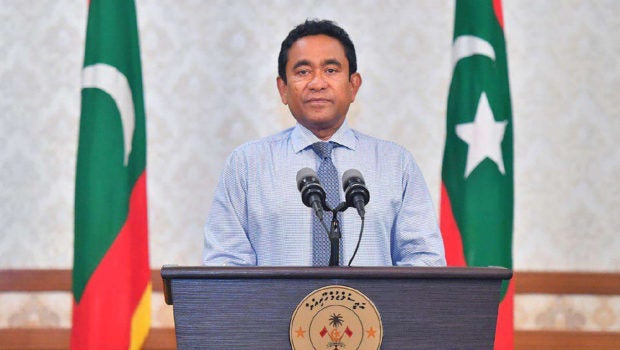 This handout picture released by the Maldives Presidency on September 24, 2018 shows Maldives President Abdulla Yameen during a statement announcement in Male. Maldives President Abdulla Yameen on September 24 conceded defeat in elections and said he would arrange a smooth transition for president-elect Ibrahim Mohamed Solih. “I have accepted the results from yesterday,” Yameen said in a televised address to the nation after Sunday’s election gave the joint opposition candidate 58.3 percent of the vote.  AFP PHOTO / MALDIVES PRESIDENCY / Handout

Colombo, Sri Lanka – The strongman president of the Maldives on Monday conceded his surprise electoral defeat, easing fears of a fresh political crisis in the archipelago at the center of a battle for influence between India and China.

“The Maldivian people have decided what they want. I have accepted the results from yesterday (Sunday),” Abdulla Yameen said in a televised address to the Indian Ocean nation a day after the joint opposition candidate unexpectedly triumphed.

“Earlier today (Monday), I met with Ibrahim Mohamed Solih, who the Maldivian electorate has chosen to be their next president. I have congratulated him,” Yameen also said.

He said he would hand over power when his term in office ends on November 17, and ensure a smooth transition in the 1,200-island nation popular with foreign tourists for its white sands and blue lagoons.

There had been concerns at home and abroad that Yameen might not accept the outcome.

At the last election in 2013, the Supreme Court annulled the result after Yameen trailed former president Mohamed Nasheed, giving Yameen time to forge alliances and win a second round of voting that was postponed twice.

Results from Sunday’s election released by the electoral commission showed Yameen on 41.7 percent of the vote, well behind Solih on 58.3 percent – the only other name on ballot papers.

The final official result will take up to a week to be published.

The outcome was a major surprise, with Yameen’s main political rivals either in prison or in exile, media coverage of the opposition sparse, and monitors and the opposition predicting the vote would be rigged.

Yameen stayed quiet overnight after the outcome became clear. But signs grew Monday that he would throw in the towel, with a foreign ministry statement saying Solih had won and state media showing him claiming victory.

Nearly 90 percent of the 262,000 electorate turned out to vote, with some waiting in line for more than five hours.

Celebrations broke out across the 1,200-island tropical archipelago on Sunday night, with opposition supporters waving yellow flags of Solih’s Maldivian Democratic Party (MDP) and dancing in the streets.

On Monday however the situation was calm.

The US State Department, which had warned of “appropriate measures” if the vote was not free and fair, had called on Yameen to “respect the will of the people”.

Sri Lanka, home to many Maldivian dissidents, also congratulated him but China was yet to comment, with Monday being a public holiday.

Beijing loaned Yameen’s government hundreds of millions of dollars for infrastructure projects like the new “China-Maldives Friendship Bridge”, which opened in August.

This has stoked fears among Western countries and India about China’s growing influence under its “Belt and Road Initiative” stretching from Asia into Africa and Europe.

Solih had the backing of a united opposition trying to oust Yameen but struggled for visibility. The local media was fearful of falling foul of heavy-handed decrees and reporting restrictions.

In February Yameen imposed a 45-day state of emergency, alarming the international community, in what was seen as an attempt by his opponents in parliament to impeach him.

A crackdown saw former president Maumoon Abdul Gayoom – Yameen’s half-brother – jailed along with the Chief Justice and another Supreme Court justice amid accusations of an imminent coup.

Independent international monitors were barred from the election and only a handful of foreign media were allowed in to cover the poll.

The Asian Network for Free Elections, a foreign monitoring group that was denied access to the Maldives, said the campaign had been heavily tilted in favour of 59-year-old Yameen.

The government had used “vaguely worded laws to silence dissent and to intimidate and imprison critics”, some of whom had been assaulted and even murdered, according to Human Rights Watch.

Foreign monitors said Yameen failed to carry out any large-scale fraud thanks to intense international and local scrutiny from civil society groups.

“In the face of massive pressure, they had to abandon their plans,” Rohana Hettiarachchi of the Asian Network for Free Elections told AFP. /kga