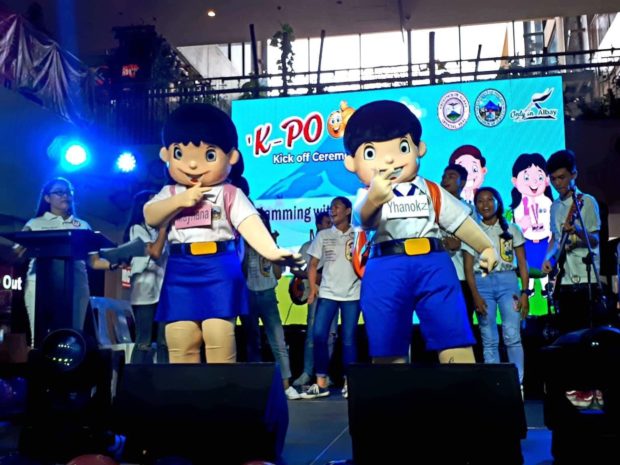 Mascots Mayhana and Yhanokz will visit schools in Albay to teach children good values under a  program spearheaded by the Department of Education. PHOTO by Michael Jaucian/Inquirer Southern Luzon

LEGAZPI CITY — To revive “fading” Filipino values, particularly “paggalang at pagsunod” (being respectful and obedient) among students, the Department of Education (DepEd) Division of Albay, in partnership with the provincial government, launched the K-PO project on Monday.

The K-PO (OK PO) project will be applied and incorporated in the K to 12 program of DepEd.

Judith Restubog, Education program supervisor of Edukasyon sa Pagpapakatao, said “the project will focus on strengthening the positive values among learners which are almost not being observed and practiced nowadays.”

“The K to 12 program not only aims to produce competitive graduates but (citizens who) also possess good values that can be applied in community and home,” DepEd Albay School Division Superintendent Bebiano Sentillas said.

He added that learners today are very much influenced by social media and forget to focus on their studies.

Mascots Mayhana and Yhanokz were introduced during the kick off ceremony.

Froilan Tena, who conceptualized the mascots, said the two characters will visit schools and will serve as models of good behavior to students. Several posters on good values were also unveiled during the event. /ee

Read Next
Iran holds funerals for victims of terror attack in Ahvaz
EDITORS' PICK
10 Filipinos positive for COVID-19 in UK, 7 in Ireland — envoy
Nograles: Cabinet members to donate 75% of monthly salary to aid COVID-19 fight
Quick chat with Nicole Andersson: ‘You really don’t need much to be happy’
IATF to LGUs: Issue ordinances vs attacks on frontliners, COVID-19 patients
Diokno to Duterte: OK to make fun of buck tooth, but focus on people’s needs first
Robredo spox thanks Duterte for defending VP’s efforts vs COVID-19
MOST READ
Coronavirus hotbed Rizal to shut borders on April 6
Sotto on Isko Moreno’s call: We do our job without the media following our every move
ADB warns PH against prolonged lockdown
Gov’t mulling quarantine period extension of 15-20 more days
Don't miss out on the latest news and information.