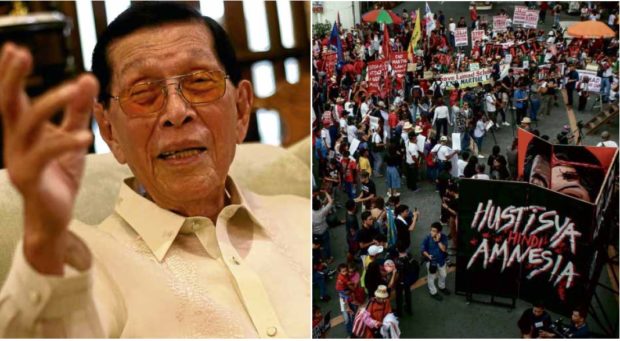 Citing “court decisions” as well as the law for martial law victims, Malacañang on Monday said former Senators Juan Ponce Enrile and Ferdinand “Bongbong” Marcos Jr. could not distort what really transpired during the regime of the late dictator Ferdinand Marcos.

“As far as the Palace is concerned, there are decisions affirming that there were grave human rights violations committed during the Marcos regime. There’s even a law in Congress which provides compensation for victims of martial law,” presidential spokesperson Harry Roque said at a press briefing.

Roque said he did not think Enrile and Marcos could “twist history when there’s a law and there are court decisions attesting to what happened during martial law.”

He was referring to Republic Act No. 10368, or the Human Rights Victims Reparation and Recognition Act of 2013, which compensates victims of human rights violations of the Marcos regime.

The agency tasked with evaluating the reparation claims has said it will extend monetary compensation to over 11,000 people after completing its final list.

The Palace was reacting to Enrile’s claim in a one-on-one interview with the Marcos scion that not even a single person was arrested because of political beliefs and for criticizing the late dictator during martial law.

Enrile served as defense chief and martial law administrator during the Marcos regime.

“They claim that we killed a lot of people. When I was interviewed by someone some time ago, I challenged her, name me one that we executed, other than Lim Seng,” Enrile told Bongbong in the interview.

The interview was aired through Bongbong Marcos’ social media accounts on Thursday, a day before the 46th anniversary of martial law declaration in the Philippines.

The elder Marcos placed the country under martial law on Sept. 21, 1972.

Ninoy Aquino’s assassination in 1983 led to massive protests that culminated in the ouster of the dictator three years later.

Sen. Nancy Binay debunked Enrile’s claims that no critic was arrested during the Marcos regime.

Her mother, Elenita, was pregnant with her when her father, Jejomar, was jailed during martial law.

Senator Binay said her nickname as a child was “Makibaka,” often shortened to “Maki,” because of her family’s involvement in political activism during the Marcos regime.

Her experience of martial law was different from what Enrile said.

“Based on what I experienced growing up, this was what I saw during that period. It’s a fact my father was jailed. I grew up joining rallies. I remember every Christmas, we visited political prisoners, I think Satur Ocampo and Crispin Beltran,” she told reporters.

Jejomar Binay, a former Vice President, was an activist and belonged to Mabini, a group of human rights lawyers that was founded to fight the Marcos dictatorship.

The Binay family’s weekend activity was to join rallies where they walked from Gil Puyat Avenue to Liwasang Bonifacio in Manila, Senator Binay recalled.

“There was really a struggle,” she said.

Sen. Leila de Lima slammed Enrile for choosing to squander his long life “on the perpetuation of lies about martial law.”

“Unfortunately for him, many of their victims—those who survived the torture chambers—are still alive to remind us of the truth,” De Lima said.

Commission on Human Rights Chair Chito Gascon said a lie was still a lie even if said a million times.

Gascon was referring to Enrile’s claims about martial law.

He noted that many martial law victims and survivors had debunked Enrile’s claims.

He said that such “attempt at historical revisionism will continue on the part of those who want to forget that sad part of our history.” —With a report from Pathricia Ann V. Roxas