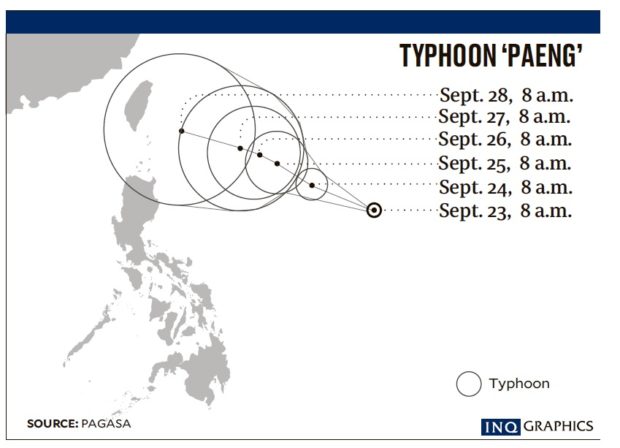 ITOGON, Benguet — Some families heeded the order to evacuate three communities here tagged as “danger zones” due to the threat of more rains this week from Typhoon “Paeng,” Mayor Victorio Palangdan said on Sunday.

Pagasa forecasters do not expect the typhoon to make landfall, but they warn of possible flash floods or landslides in the rest of the country, including Metro Manila, caused by scattered light to moderate and at times heavy rains brought by localized thunderstorms.

Residents and rescue volunteers on Sunday performed “pammakan,” a Kankana-ey ritual seeking the help of ancestral spirits in finding about 30 people buried in thick mud from a landslide on Sept. 15 that claimed 48 lives at Sitio 070 in Barangay Ucab.

About 90 rescuers and volunteers, aided by three backhoes, continued to dig for survivors while the weather was good.

Residents invoked the spirits of the dead, including the landslide fatalities, to guide them to the right direction.

Those missing were not all from Itogon. Some were migrants from other provinces like Ifugao, whose relatives performed separate “baki” (rituals) to seek the help of spirits in the search.

Others came from the provinces of Nueva Vizcaya, Aurora, Batangas and Iloilo.

Kennedy Waclin, a community elder and Barangay Ucab chair, performed the pammakan by butchering sacrificial pigs and preparing meals that were offered to the spirits while participants recited the “bunong” (prayer chant).

“We called them to partake of the meals, then go and guide our rescuers to either the bodies or their companions in other parts of Itogon that suffered landslides,” Waclin said.

Rescuers were also searching for four people at Barangay Loacan and two others at Barangay Virac.

While the rituals were taking place, three teams composed of village leaders and policemen on Sunday visited houses in three communities and ordered families to pack up and leave.

Displaced families, who had been staying in classrooms, were evicted to allow pupils to return to school on Sept. 24.

Palangdan said the evacuation order to families still staying at Sitio 070 and Sitio Firstgate in Ucab and at Sitio Luneta in Barangay Loacan came from the Office of the President.

A team of government geologists inspected Ucab last week and confirmed that all three communities had become unstable.

Before leaving, many of these families returned to their homes to secure their belongings, after a series of burglaries when they first fled due to Ompong.

Most families did not need a lot of prodding to evacuate due to the stench near the landslide areas.

“They know that when we say evacuate, it means we are after their safety,” Palangdan said.

While the government works out support for the displaced families, some civic groups have been focusing on the children.

The Baguio-based Helping Hands Healing Hearts Ministries gathered 50 children of families staying at shelters and turned a local classroom into a Bible class where the kids played games, sang songs and bonded together in prayer.

Some of the religious volunteers who showed up in Itogon came from Olongapo City.

The group said its major task was to remind the children that life goes one despite any major tragedy.

“Their parents are distressed because of the situation and it affects the children. By learning life skills, we hope they will rediscover happiness and be more resilient,” said Twinkle Vizcara, one of the group’s members.

In its 3 p.m. advisory on Sunday, Pagasa said Paeng was spotted 1,315 kilometers east of Tuguegarao City.

While Paeng may affect extreme northern Luzon, it will have “no significant enhancement of the southwest monsoon,” Pagasa said. —WITH A REPORT FROM JEANNETTE I. ANDRADE IN MANILA