Mexico president-elect says will not fight with Trump 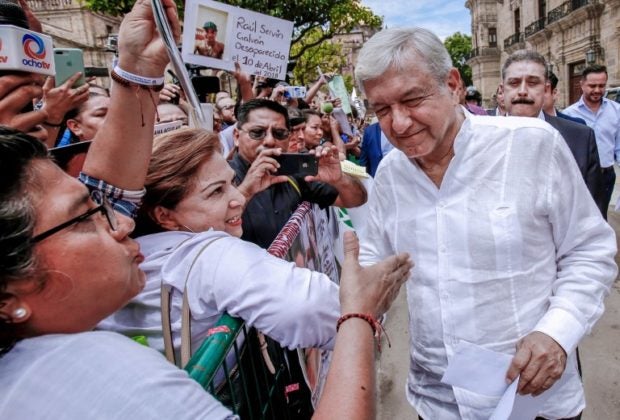 Mexican President-elect Andres Manuel Lopez Obrador greets people upon arriving at the Jalisco Palace of Government, in Guadalajara, Jalisco State, Mexico, for a meeting with Governor Aristoteles Sandoval on September 18, 2018 as part of his national tour to thank those who supported and voted for him in the July 1 elections. AFP PHOTO / Ulises Ruiz

MEXICO CITY — Mexican president-elect Andres Manuel Lopez Obrador said  he does not want to fight with US President Donald Trump on immigration.

Trump’s hardline approach on the subject has ramped up tensions and riled Mexicans, who he previously claimed would pay for the construction of a wall between the two countries.

But the leftist Lopez Obrador told reporters in the border state of Sonora on Saturday that angry exchanges were not the answer.

“The migration problem is not resolved by building walls or by use of force, but it’s a diplomatic job of respect,” added Lopez Obrador, who takes office on December 1.

On Saturday, US authorities announced the start of construction on a five-meter wall along a 6.5-kilometer stretch of the Texan border town of El Paso.

Trump’s insurgent campaign for the White House played heavily on a pledge to build a wall on the southern border and to deport millions of undocumented migrants, amid what he claimed was a crisis of immigration.

He initially demanded that Mexico pay for the barrier, a demand Mexico repeatedly rejected. Congress has so far approved $1.6 billion of $25 billion Trump had sought.

Much of the border already has fencing or other barriers, but Trump has ordered a “contiguous, and impassable physical barrier,” which scientists say would threaten more than 1,000 species of animals.

ADVERTISEMENT
Read Next
Typhoon ‘Trami’ to enter PAR on Sunday
EDITORS' PICK
PH walks back, suspends VFA termination ‘upon the President’s instruction’
Leveling up your ‘lutong bahay’ with the kitchen companion you never knew you needed
PH COVID-19 cases near 19K mark, as recoveries breach 4,000
South Korea clamps down again as virus rebounds
Cherry Mobile teams up with Cloud Panda PH, launches online store
San Juan City to launch pop-up bike lanes
MOST READ
Calida ‘just the lawyer, not the client’ and must ‘never lose his cool’ – Macalintal
7 members of nurse’s family in Laguna catch COVID-19
PH COVID-19 cases near 19K mark, as recoveries breach 4,000
Amid protests, Trump talks of war — and reelection
Don't miss out on the latest news and information.