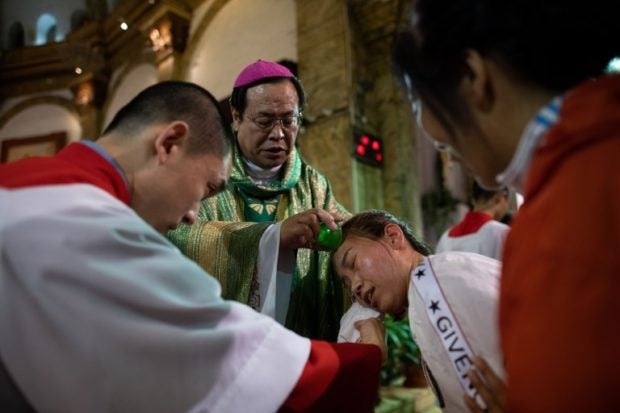 Bishop Joseph Li Shan (center) baptizes a woman during a Mass at the South Cathedral in Beijing on September 22, 2018. The Vatican on September 22 announced a historic accord with China on the appointment of bishops in the communist country as Pope Francisrecognizedd seven Beijing-appointed bishops in a move that could pave the way for a rapprochement between the Catholic Church and the world’s most populous country. AFP

VATICAN CITY, Holy See – The Vatican on Saturday announced an historic accord with China on who appoints bishops in the Communist country, paving the way for rapprochement between the Catholic Church and the world’s most populous country.

Shortly after the deal was unveiled, Pope Francis recognized seven clergy appointed by Beijing, which has not had ties with the Vatican since 1951.

China immediately said it was hopeful of better relations, while Taiwan insisted its ties with the Vatican were safe.

There are an estimated 12 million Catholics in China, divided between a government-run association whose clergy are chosen by the Communist Party and an unofficial church which swears allegiance to the Vatican.

The Holy See is one of only 17 countries that recognize Taiwan, officially known as the Republic of China, instead of diplomatic ties with Beijing.

Pope Francis has sought to improve relations with China since he took office in 2013, but previous attempts foundered over Beijing’s insistence that the Vatican give up recognition of its rival and promise not to interfere in domestic religious issues.

Saturday’s breakthrough came as churches have been destroyed in some Chinese regions in recent months, and there has been a clampdown on Bible sales. Crosses have been removed from church tops, printed religious materials and holy items confiscated, and church-run kindergartens closed.

The agreement with China “concerns the nomination of Bishops, a question of great importance for the life of the Church,” the Vatican said in a statement as Pope Francis began a visit to the Baltic states.

The deal “creates the conditions for greater collaboration at the bilateral level,” it added.

Following the announcement, the pontiff recognized seven bishops who had been ordained in China without the approval of the Holy See, his office announced.

“Pope Francis hopes that, with these decisions, a new process may begin that will allow the wounds of the past to be overcome, leading to the full communion of all Chinese Catholics,” a statement said.

The pope also posthumously recognized an eighth bishop who “had expressed the desire to be reconciled with the Apostolic See” before he died last year, it said.

China said the “provisional” agreement was signed in Beijing by vice foreign minister Wang Chao and a Vatican delegation headed by the under-secretary for relations with states, Antoine Camilleri.

The two sides, it added, “will continue to maintain communication and push forward the improvement of bilateral relations”.

The Vatican cut ties with Beijing two years after the founding of the communist People’s Republic.

The Taiwanese foreign ministry insisted Taipei would not lose its only diplomatic ally in Europe over the agreement and said it hoped the Holy See would ensure that Catholics on the mainland “receive due protection and not be subject to repression”.

Analysts warn Beijing could use the accord to further crack down on Catholic faithful.

Jonathan Sullivan, director of the China Policy Institute at the University of Nottingham, described the accord as “a strategic move on China’s part; and a naive one on the Vatican’s”.

Sullivan said China’s Communist party will frame the deal as the Vatican’s seal of approval to the state-run Catholic Church at a time Christian believers are facing a severe crackdown.

“Ultimately, the Party would like to subsume all forms of worship under state organs that make it easier to manage and ensure that everyone’s primary loyalty is to the state,” Sullivan told AFP.

A priest from an underground church in China’s northern Hebei province said some of his flock had reservations.

“For the church members and priests, there are some that accept, and some that cannot completely understand (the situation), because they remain suspicious of the Communist Party and the Chinese government. They doubt their sincerity,” the priest said on condition of anonymity.

Churchgoers in Beijing and Shanghai at Saturday evening services were generally unaware that a deal had been struck.

“Whatever this means for the church is up to God. As a follower of the church, we pray for the best,” said one, who gave her name only as Magdalene. /cbb