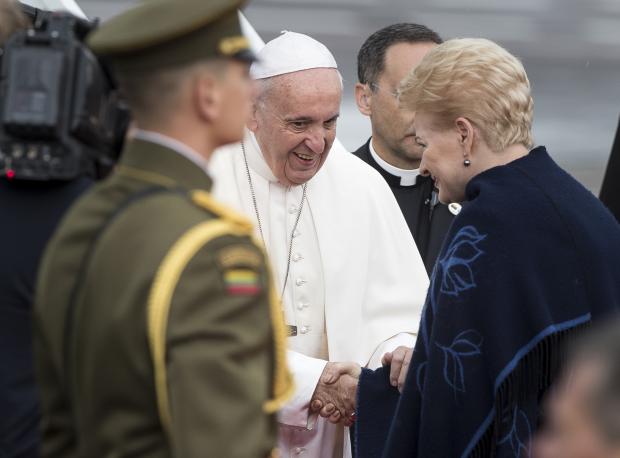 Pope Francis is flanked by Lithuania’s President Dalia Grybauskaite during a welcome ceremony at the Vilnius’ airport, Lithuania, Saturday, Sept. 22, 2018. Pope Francis begins a four-day visit to the Baltics amid renewed alarm about Moscow’s intentions in the region it has twice occupied. (Photo by MINDAUGAS KULBIS / AP)

VILNIUS, Lithuania — Pope Francis on Saturday urged Lithuanians to use their experience enduring decades of Soviet and Nazi occupation to be a model of tolerance in an intolerant world as he began a three-nation tour of the Baltic region amid renewed alarm over Russia’s intentions there.

Francis was greeted by Lithuanian President Dalia Grybuskaiteova at the airport and immediately launched into a hectic schedule of political meetings, encounters with Lutheran and Russian Orthodox leaders, and the ordinary Catholic faithful who are a majority in Lithuania but minorities in Latvia and Estonia.

Speaking outside the presidential palace in the Lithuanian capital Vilnius, Francis recalled that until the arrival of “totalitarian ideologies” in the 20th century, Lithuania had been a peaceful home to a variety of ethnic and religious groups, including Christians, Jews and Muslims.

He said the world today is marked by political forces that exploit fear and conflict to justify violence and expulsions of others.

“More and more voices are sowing division and confrontation – often by exploiting insecurity or situations of conflict – and proclaiming that the only way possible to guarantee security and the continued existence of a culture is to try to eliminate, cancel or expel others,” Francis said.

He said Lithuania could be a model of openness, understanding, tolerance and solidarity.

“You have suffered ’in the flesh’ those efforts to impose a single model that would annul differences under the pretense of believing that the privileges of a few are more important than the dignity of others or the common good,” he said.

Francis was travelling to the region to mark the 100th anniversaries of their independence and to encourage the faith in the Baltics, which saw five decades of Soviet-imposed religious repression and state-sponsored atheism. During the 1940s Nazi occupation, Lithuania’s centuries-old Jewish community was nearly exterminated.

“Fifty years of occupation left their mark both on the church and on the people,” said Monsignor Gintaras Grusas, archbishop of Vilnius. “People have deep wounds from that period that take time to heal.”

Lithuania, Latvia and Estonia, which each have ethnic Russian minorities, are also in lockstep in sounding alarms about Moscow’s military maneuvers in the Baltic Sea area following Russia’s 2014 annexation of Ukraine’s Crimean Peninsula and its support of separatists fighting the Ukrainian government in eastern Ukraine.

The Vatican, however, has been loath to openly criticize Moscow or its powerful Orthodox Church.

The Baltic countries declared their independence in 1918 but were incorporated into the Soviet Union in 1940 and remained part of it until the early 1990s, except for the 1941-1944 Nazi occupation during World War II. All three joined the European Union and NATO in 2004 and are strong backers of the military alliance, which sees them as a bulwark against Russian incursions in Eastern Europe.

The trip, featuring Francis’ fondness for countries on the periphery, will be a welcome break for the Argentine pope. His credibility has taken a blow recently following missteps on the church’s priestly sex abuse scandal and recent allegations that he covered up for an American cardinal.

His visit to Vilnius coincides with the 75th anniversary of the final destruction of the Vilnius Ghetto, on Sept. 23, 1943, when its remaining residents were executed or sent off to concentration camps by the Nazis.

Until Francis’ schedule was changed three weeks ago, there were no specific events for him to acknowledge the slaughter of some 90 percent of Lithuania’s 250,000 Jews at the hands of Nazi occupiers and complicit Lithuanian partisans — a significant oversight for the leader of the world’s 1.2 billion Catholics.

At the last minute, the Vatican added in a visit to the Ghetto, where Francis will pray quietly on the day when the names of Holocaust victims are read out at commemorations across the country.

The issue of Lithuanian complicity in Nazi war crimes is sensitive here, with the Jewish community campaigning to have street signs named for heroes who fought the Soviets removed because of their roles in the executions of Jews.