Duterte: Profit from mining not enough to compensate agony from tragedy | Inquirer News

Duterte: Profit from mining not enough to compensate agony from tragedy 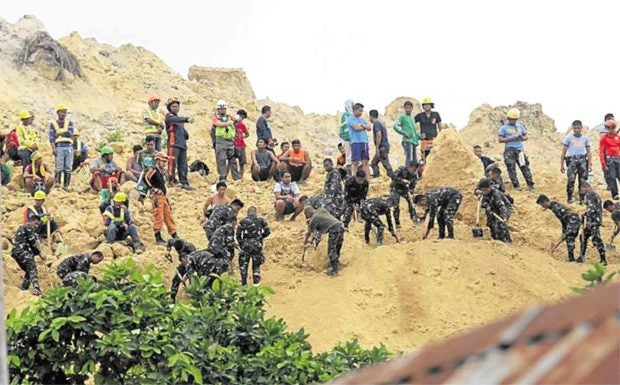 MANUAL SEARCH A team of government rescuers use shovels and pickaxes to dig through earth and rocks that buried a community near a limestone quarry in the city of Naga in Cebu province. JUNJIE MENDOZA/CEBU DAILY NEWS

Following a site visit to the landslide area in Barangays Tinaan and Tagaytay om Friday afternoon, Mr. Duterte spoke in front of close to 400 gastroenterologists from different countries at a forum at Shangri-La Mactan.

While he admits that the mining industry of the country has contributed P70 billion in revenues to the government, the President said this is not enough to compensate for the loss of lives and grief when disasters happen.

“I have been saying right at the start, that one day, and I hope to realize it, I pray to God that I will still be there… I have been warning them that I will eventually close mining operations in the most part of the country,” he said in his speech.

“This P70 billion we earn from taxes is not enough to compensate for all the suffering and agony that we have to experience every time there is a calamity,” he added.

A few days ago, the President also visited Benguet province where dozens were killed in landslides near mining areas in the aftermath of typhoon “Ompong” (international name: Mangkhut).

President Duterte also recalled in his speech having to go and visit families of the victims.

In Cebu, he also visited some of the families in Naga City who were staying in an evacuation center following the landslide last Thursday.

“Yesterday (Thursday), this (landslide in Naga City) happened. I had to fly here to also condole and to extend assistance,” he said.

Mr. Duterte then admitted that this objective cannot be done without Congress which would have to repeal the Philippine Mining Act.

The President has been expressing his opposition to open-pit mining and had agreed to a temporary ban on it.  /kga