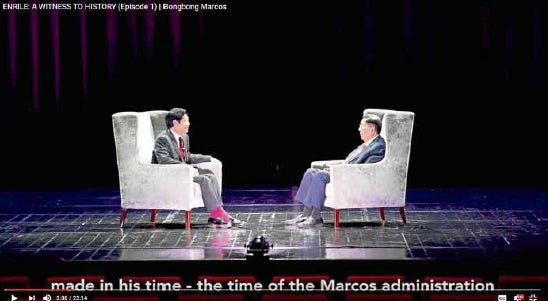 To judge from the reactions of opposition figures during the martial law era, former Marcos Defense Minister and Senator Juan Ponce Enrile’s lasting legacy might well be a long life and a short memory.

Enrile’s musings on martial law with former Senator Ferdinand “Bongbong” Marcos Jr., which was posted on social media on Thursday night, was “a pathetic attempt at rewriting history,” said the family of the anti-Marcos senator and human rights lawyer, Jose “Pepe” Diokno.

In the first part of the tête-à-tête titled “JPE: A Witness to History,” Enrile defended the military regime that lasted from 1972 until the Marcoses were ousted in a peaceful People Power Revolution on Edsa in 1986.

The four-day uprising started when Enrile and then Armed Forces Vice Chief of Staff Fidel V. Ramos holed up inside Camp Crame after Enrile realized that Marcos’ men had discovered his plan to form a junta.  Then Manila Archbishop Jaime Cardinal Sin called on civilians to protect the besieged officials in a mass mobilization that saw most of Marcos’ forces joining Enrile and Ramos, and eventually isolating Marcos and his family, who were flown to exile in Hawaii by the US government.

Particularly galling for the Diokno children was Enrile’s claim that “the late Pepe Diokno didn’t want to be released. I told him, ‘Pepe, just sign anything and just get out of here.’”

The family maintained that Senator Diokno “objected to the terms of the pledge (he was asked to sign), not to his release.”

The family was referring to a pledge of allegiance that Enrile had asked Diokno to sign, which contained a paragraph saying that the signatory should agree not to “perform any act in violation of” the presidential proclamation on martial law, and report any acts that would violate the pledge.

The Diokno children also seized on Enrile’s assertion that critics of the Marcos regime were “inconvenienced for a while, but all were released.”

“Are we now to take torture, forced disappearance, and loss of life as forms of ‘inconvenience?’” they asked.

Diokno’s family also belied Enrile’s claim that no one was arrested “simply because he criticized President Marcos,” and cited their father’s case. Senator Diokno was among the first political prisoners of the period, and was released two years later, on Sept. 11, 1974.

Former Senate President Aquilino “Nene” Pimentel Jr. also brushed off Enrile’s defense of martial law as an attempt to “cement” his relationship with the Marcoses, “hoping, probably, that Bongbong will become President, eventually. Of course, without my vote.”

Recalling his own arrest and detention in Camp Crame, the 84-year-old Pimentel said of Enrile, who is 94: “Maybe he forgot me who was arrested. That’s part of aging.”

Pimentel warned that those with hidden agendas and were trying to revise the country’s recollection of martial law simply wanted to have another shot at power in the 2019 midterm elections.

Former President Benigno S. Aquino III also called out Marcos and Enrile for their attempt to “change reality” when they claimed that no one was “arrested, tortured or killed” on the basis of their political beliefs during martial law.

“[Enrile] is quite old now,” Aquino said. “But he can’t use that as an excuse to force us to believe in the parts of reality he wishes to change.”

Aquino’s father, former Senator  Benigno “Ninoy” Aquino Jr., who was arrested and later sentenced to death in a sham military trial, is arguably the most prominent political prisoner of the era.

The former President pointed to Republic Act No. 10368, which created a claims board mandated to pay reparations to human rights victims was enough proof of the abuses of martial law. At least 11,000 of the 75,000 who have filed for reparations have been paid out as of May.

“(To say those things) is like spitting on the graves of that period’s victims,” Aquino’s cousin, Senator Bam Aquino, said.

Gabriela Rep. Emmi de Jesus who, with her husband, was also arrested and tortured during martial law, described Enrile’s statements as “purely aimed at aiding the full political rehabilitation of the Marcoses. But martial law survivors like me will contest these lies head-on.”

Bayan Muna Rep. Carlos Zarate belied Enrile’s claim that there was no massacre carried out by the Marcos regime, citing the murders of some 1,500 residents of a Muslim community in Palimbang, Sultan Kudarat, in September 1974 which, he said, was well-documented.

“We must not allow this historical revisionism to gain any traction. We must continue to educate everybody on the horrors of martial rule and that they are still happening today,” said former Bayan Muna Rep. Neri Colmenares, who was also tortured by the military when he was an 18-year-old student leader.

“(Let’s) remain vigilant as we continue to face familiar threats to our freedom and democracy.  They shall not prevail. Not again. Not this time,” vowed former Solicitor General Florin Hilbay.

In a statement, Liberal Party president Senator Francis Pangilinan pointed out that “the Marcos dictatorship legalized plunder, bringing hunger and misery to our people.”

Pangilinan noted that by 1984, inflation had shot up to 50 percent while underemployment had climbed to 33 percent.  Filipinos are still paying for the debts that his regime had incurred, he added.

Detained Senator Leila de Lima noted that Marcos and President Rodrigo Duterte were very much alike in their style of governance, and that both had declared martial law.