Rain did not dampen the fervor of millennials who participated in anti-martial law demonstration Friday at the Luneta Park in Manila.

On the 46th anniversary of martial law declaration in the country, these millennials – students from various universities and advocacy groups – declared their disgust over President Rodrigo Duterte, who has been vocal about his admiration to the late dictator Ferdinand Marcos and his brand of governance, even asserting they know much about the nation’s history.

A Manila university student said not being physically present during the Marcos’ martial law years is not a reason to disregard what happened during the so-called dark days of Philippine history.

“We think it is important to remember events like these, to raise awareness among the youth,” she added.

Organizers from the United People’s Action said at least 10,000 people, majority of which were students, marched from different parts of Manila to Roxas Boulevard for the protest action.

Personalities such as former Chief Justice Maria Lourdes Sereno, former Bayan Muna Rep. Teddy Casiño, Kabataan party-list Rep. Sarah Elago, and former Solicitor General Florin Hilbay addressed the crowd. They asked them to use the past as an example to stay vigilant amid the present situation in the country.

Sereno, in particular, requested young people to read Supreme Court (SC) documents on the two-decade rule of Marcos, which she said has been labeled “wrong and evil”. 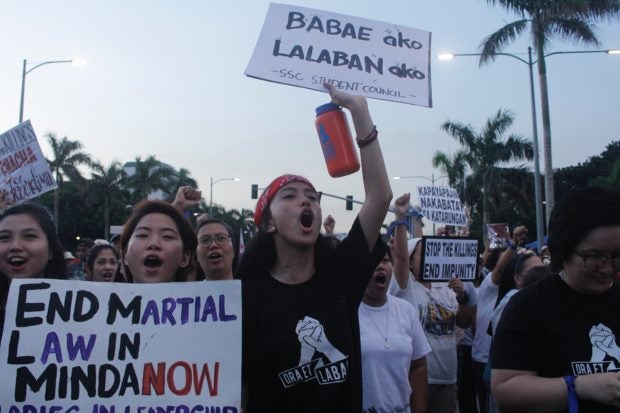 According to the Manila Police District (MPD), there were around 6,000 protesters during its peak, which was between 5 p.m. to 6 p.m.  However, organizers claimed their numbers actually swelled up to 20,000 at one point.

In the nearby pro-Duterte rally — located at the open field in front of Quirino Grandstand — the MPD said at least 3,500 were present.  People started to disperse by 5 p.m.

Despite the proximity of the two events, the MPD said there were no untoward incidents recorded.