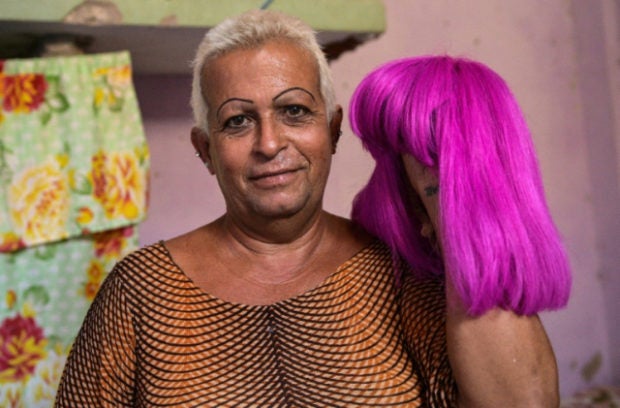 Hernandez says cruelty towards gays has given way to acceptance. Image: AFP/Yamil Lage

Jose Augustin Hernandez is a 53-year-old local government official in Cuba — who is transgender, sports a flamboyant pink wig and goes by the name Adela.

“I’m more revolutionary than gay,” says Hernandez, who has photos of both her boyfriend and the famous Argentine guerrilla on the wall behind her. “And look, no one is more gay than me, because I was born gay.”

Sixty years ago, Santa Clara is where Guevara derailed one of US-backed Cuban dictator Fulgencio Batista’s military trains during the guerrilla resistance, and the city adopted him as one of its own.

His remains and those of some of his Bolivian comrades in arms are buried there.

Santa Clara is located just 30 kilometers (20 miles) from Placetas, the birthplace of current Cuban President Miguel Diaz-Canel, who took over from Raul Castro in April.

Over the last few decades, the surrounding Villa Clara province has developed into a haven for the LGBT community.

Santa Clara is home to a gay-friendly hotel and the El Menjuje cultural center, which has put on drag queen shows since 1984, when homophobia was rampant in the Caribbean island nation.

The city of 200,000 people has been at the forefront of the push to legalize gay marriage in Cuba, something that will be put to a referendum in February as part of a new constitution.

“Santa Clara is something else — nothing is strange or surprising here because anything can happen,” said Ramon Silverio, the 69-year-old founder of El Mejunje.

“A space for everyone”

Built on the ruins of a hotel, El Mejunje offers young artists a theater, concert hall and dance space where they can show off their talents. The entrance fee is five pesos ($0.20).

“My idea was to have a space for everyone and everything, regardless of who they were or what their preferences were,” Silverio told AFP.

“During the first years, El Mejunje was seen as hell, this place that brought together those people who, stereotypically, weren’t accepted by society.”

That was during a time when homosexuals faced hostility and marginalization.

But little by little, “the image changed and people realized it was something they couldn’t deny,” Silverio explained.

“Diaz-Canel came here to El Mejunje before he was (provincial) first secretary of the party because he brought his children here for the kids’ activities we offer,” he said.

“El Mejunje changed the city and the way the country looked.”

On the terrace, computer geeks, skaters, artists, singers, parents and children all mix freely. Some are gay, some are not.

“This is the society of the future,” said Silverio.

Nearby, in a house with a bright yellow door, Saily Gonzalez and her husband opened up an inclusive hotel three years ago.

“It started with a guest, who’s now a friend, who came to do a documentary about cross-dressers. He interviewed several drag queens here in this house. Their stories were touching,” said Gonzalez.

The 27-year-old believes the constitutional change could attract LGBT tourism.

“That a little Caribbean island, like Cuba, with its complicated and contradictory political history, is ready to approve marriage for all is going to be ‘the big deal’,” she added.

“There was a lot of cruelty”

Hernandez lives in a small house in Caibarien where she has been elected councilor three times.

“Caibarien is a municipality that stands out for being open towards sexual preferences,” she said.

Hernandez went to live there following a two-year stint in prison after she was denounced for a crime by a father who wouldn’t accept his son’s homosexuality.

It was a time when it was tough being gay in Cuba.

“There was a lot of cruelty. You couldn’t be gay because you were marginalized by society and the government,” said Hernandez.

But in Caibarien, she found acceptance, where even conservative voters told her: “I prefer a queer leader to a thief.”

She wasn’t always destined for a career in politics. Hernandez originally wanted to be a soldier, but she didn’t fit in at cadet school and was instead sent to nursing school.

She now works in electrocardiography in a local clinic and lives with her partner, a 27-year-old gardener.

After 11 years together, they hope to marry.

“It’s an evolution of the human race,” said Hernandez, pointing out that Raul Castro’s daughter Mariela was the driving force behind the proposed constitutional change.

“The time has come to change everything that needs to be changed, as our commander-in-chief Fidel said.” CC