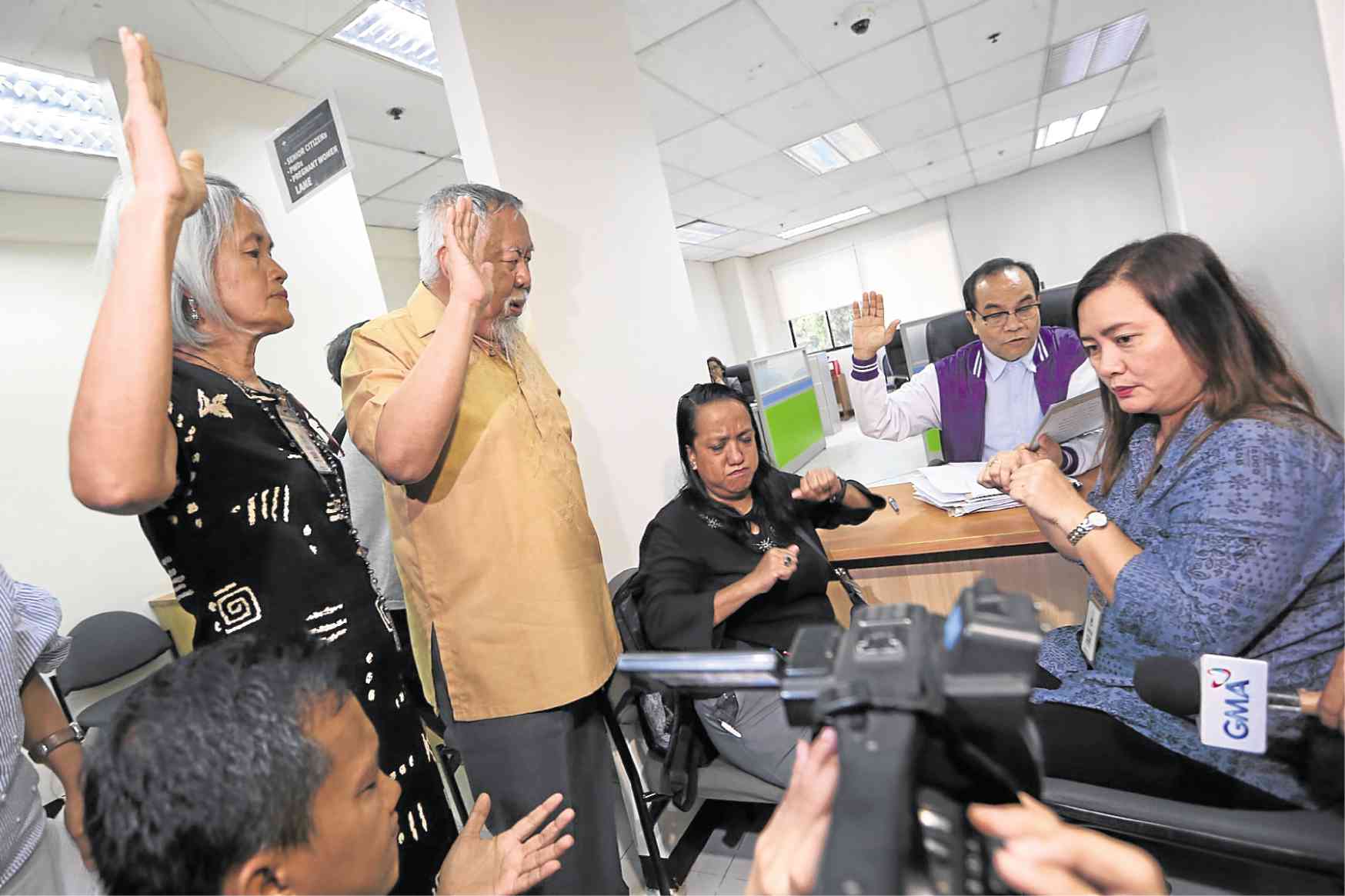 APOLOGY NOT ACCEPTED Officials of the Philippine Federation of the Deaf swear by the complaint they filed on Thursday against Assistant Secretary Mocha Uson and fellow blogger Andrew Olivar at the Office of the Ombudsman. —NIÑO JESUS ORBETA

Malacañang is leaving it to the Office of the Ombudsman to decide if Mocha Uson should be dismissed from her Palace post, after a controversial video she and a fellow blogger posted on social media last week reaped not only public indignation but a criminal complaint as well.

“The Ombudsman can already order the dismissal of anyone in government because it is both an administrative and criminal case,” Presidential spokesperson Harry Roque said in a press briefing on Thursday. “The Palace will respect the process.”

Roque was referring to the complaint filed by the Philippine Federation of the Deaf (PFD) against Mocha and fellow blogger Andrew Olivar over a Facebook video showing them making fun of the sign language used by deaf people.

Uson and Olivar are accused of violating the Magna Carta for Disabled Persons, the Cybercrime Prevention Act, the Code of Conduct for Public Officials and Employees, and the United Nations Convention on the Rights of Persons With Disabilities.

“If the Ombudsman says she should be sacked, we won’t object to it,” Roque added, noting that the Office of the President had not issued any order removing Uson as an assistant secretary under the Presidential Communications Operations Office.

A public apology issued earlier this week by Uson and fellow blogger Olivar failed to cool down public outrage over their video. For PFD president Carolyn Dagani, the two would set a bad precedent and encourage more insults directed at people with disabilities (PWDs) if left scot-free.

In an interview, Dagani said “we don’t accept (their apology). There’s so many deaf people that we have asked and I’d like to tell you that they don’t accept it.”

“It’s easy for them to apologize and change their minds. But this will really set a bad example if it is not penalized,” Dagani told reporters covering the filing.

The Ombudsman was the second agency asked by the video’s critics to take action against Uson and Olivar.

On Wednesday, the Commission on Human Rights said it had also received a complaint from PFD and would launch an investigation, even as it  already denounced Uson and Olivar’s behavior in the video as “utterly appalling” and “extremely degrading.”

In an affidavit submitted to the Ombudsman, Dagani particularly took note of Olivar’s hand-flailing in the video as “a very dangerous public example” that hearing people might copy to mock and “bully children with disabilities.”