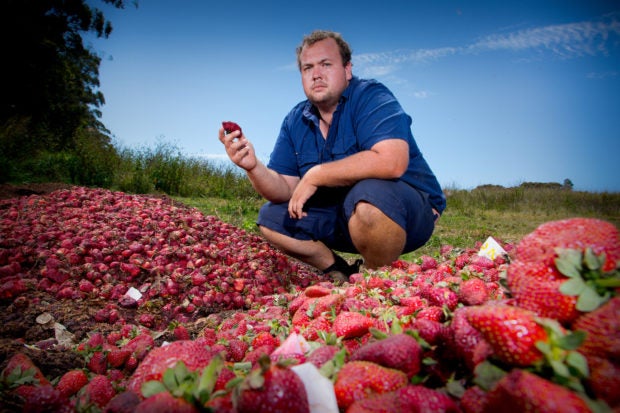 Braetop Berries strawberry farmer Aidan Young holds a strawberry as he poses amid strawberries he will destroy following a nationwide needle scare, on his farm in the Glass House Mountains in Queensland on September 20, 2018. A nationwide scare involving the piercing of supermarket strawberries with sewing needles has prompted a series of supermarket recalls, and some stores in New Zealand have temporarily banned the sale of Australian strawberries. AFP

SYDNEY – Sewing needles were taken off the shelves at a major Australian supermarket chain on Thursday amid a national panic over sharp objects being found inside strawberries and other fruit.

Police nationwide have received reports of more than 100 alleged incidents of pins and needles being found in fruit since the scare began in Queensland state earlier this month.

Most are thought to be pranks or jokes on social media, but at least two minors have been questioned by police for carrying out hoaxes.

Woolworths, one of the country’s big two supermarkets, announced that it had “taken the precautionary step” of temporarily withdrawing needles from sale, as police struggled to find the original culprit amid a spate of copycat episodes.

“The safety of our customers is our top priority,” the retailer said, without discussing further the reasons behind its decision.

The fruit scare has been given a national and international profile by new Prime Minister Scott Morrison, who has addressed it publicly several times in the last few days.

His government has successfully raised the maximum prison sentence for fruit tampering from 10 to 15 years, with parliament passing the legislation on Thursday.

Australian politicians of all stripes have been quick to appear in front of a camera eating, cutting up and picking strawberries to show their support for farmers.

Opposition leader Bill Shorten appeared in parliament to ask Australians to buy “a punnet for yourself and a punnet for the nation”.

The prime minister also shared a recipe for strawberry Pavlova used by his wife, which he declared “the best pav I’ve ever had.”/kga