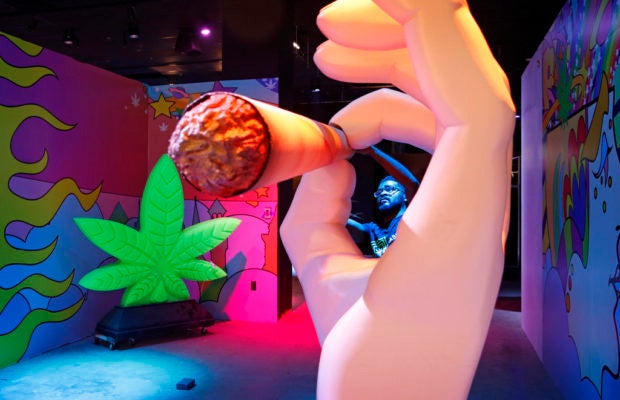 In this Tuesday, Sept. 18, 2018 photo, Gabe Williams works on a exhibit at the Cannabition cannabis museum in Las Vegas. The museum celebrating all things cannabis with displays that include a glass bong taller than a giraffe and huggable faux marijuana buds is the newest tourist attraction in Las Vegas. (AP Photo/John Locher)

Nobody will be allowed to light up at Cannabition when it opens on Thursday because of a Nevada ban on public consumption of marijuana, but visitors can learn about the drug as they snap photos.

It’s a made-for-social-media museum where every exhibit has lights meant to ensure people take selfies worthy of the no-filter hashtag.

The facility — whose founder said has a goal of de-stigmatizing marijuana use — will likely land among the talking points officials and others use to try to draw gambling-resistant millennials to Sin City.

“Our goal when people come out of this is that they don’t fear the cannabis industry if they are not believers in the industry,” founder J.J. Walker told The Associated Press.

“Cannabition is not about just serving people that like marijuana, it’s about serving the masses that want to learn about cannabis and/or just have fun and go do a cool art experience,” Walker added.

Guests will wander through 12 installations with rooms like “seed,” where people can lie down in a bed shaped like a marijuana seed, and “grow,” which features artificial plants in sizes ranging from inches to feet tall placed under bright lights to represent an indoor cannabis grow facility. 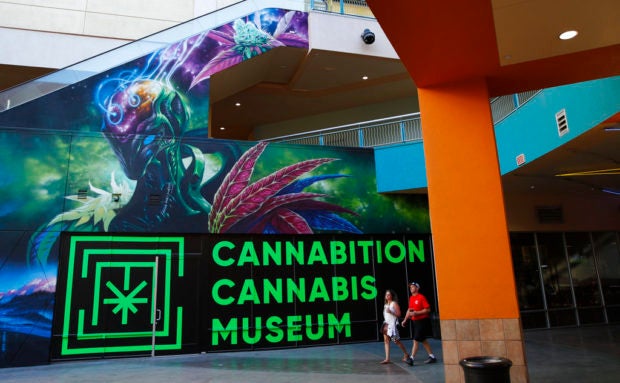 In this Tuesday, Sept. 18, 2018 photo, people walk by the Cannabition cannabis museum in Las Vegas. The museum celebrating all things cannabis with displays that include a glass bong taller than a giraffe and huggable faux marijuana buds is the newest tourist attraction in Las Vegas. (AP Photo/John Locher)

Photo ops are also available under a glow-in-the-dark tree, next to a giant marijuana leaf meant to represent an edible gummy and by a 24-foot-tall (7-meter-tall) glass bong that’s dubbed “Bongzilla” and billed as the largest in the world.

This museum in Las Vegas’ downtown entertainment district is not the Smithsonian of marijuana, but it has some educational components. Guests get an introduction from museum guides and some graphics on walls explain how concentrates are made and the differences between indica and sativa cannabis strains.

Museums always evolve with the times to remain relevant, and audience engagement is an important goal for the facilities today, said Gwen Chanzit, director of museum studies in art history at the University of Denver. For those who remember very traditional, no-photography-allowed museums, she said, “that ship has sailed.”

Many of the facility’s exhibits are sponsored by cannabis companies, with their logos prominently displayed. It is common for museums to receive the support of corporations and to place their logo on a wall.

Only adults 21 and older will be allowed at Cannabition. The tour is designed to last up to an hour.

Walker, the founder, has invited reality TV stars, models and other influencers to Las Vegas for the weekend with the charge of spreading the word about the facility.

As for those who buy a ticket but their Instagram followers are only in the dozens or hundreds, Walker said, “you’re still an influencer to your friends.”  /kga