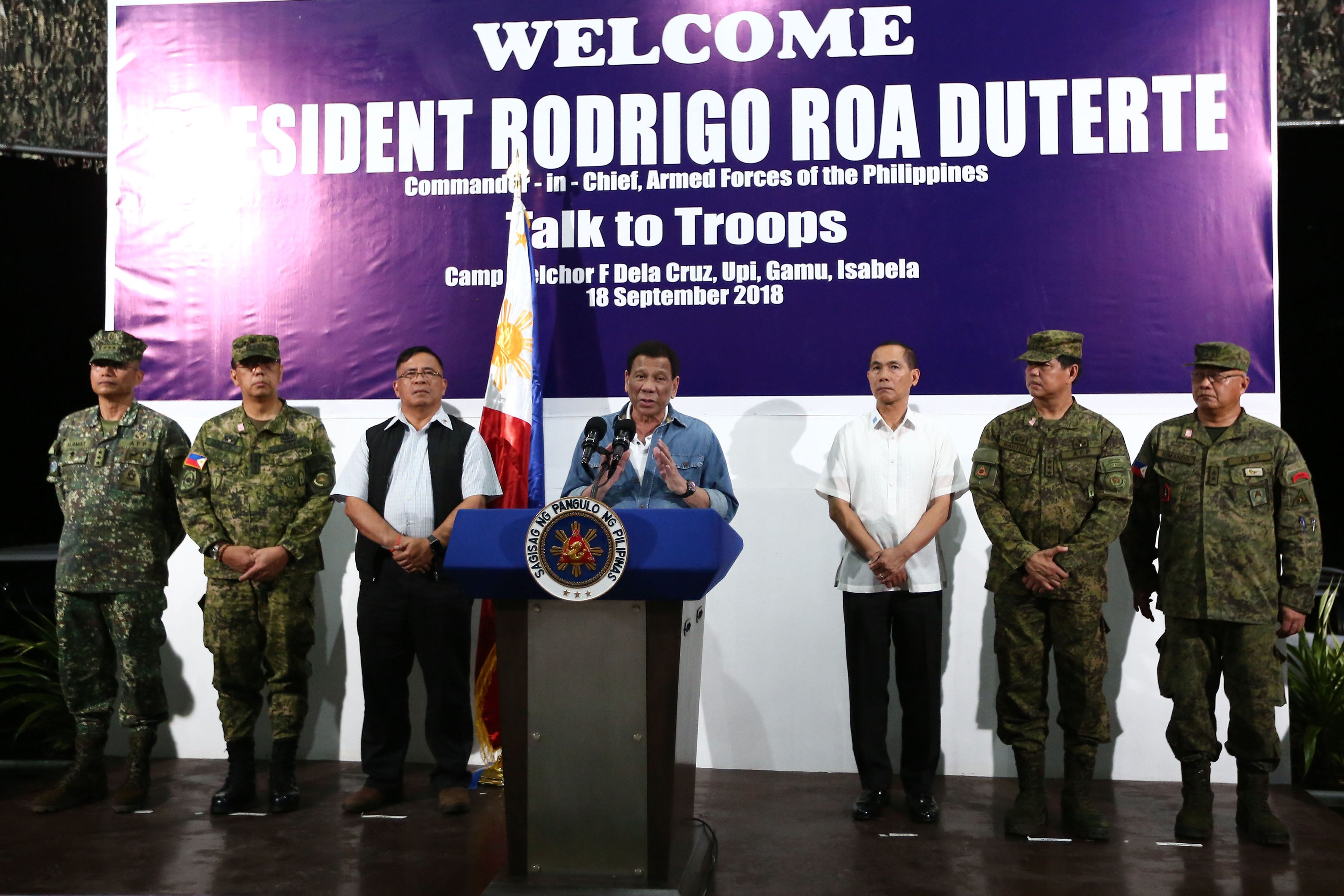 President Rodrigo Roa Duterte, in his speech during his visit to Camp Melchor F. Dela Cruz in Gamu, Isabela on September 18, 2018, reiterates that the Armed Forces of the Philippines has his full support and that he is one with them in protecting the citizens of the country. VALERIE ESCALERA/PRESIDENTIAL PHOTO

President Rodrigo Duterte on Tuesday night predicted that the communist rebellion would end by the middle of next year, a forecast immediately dismissed by the insurgents.

In a visit to the Army’s 5th Infantry Division at Camp Melchor de la Cruz in Gamu, Isabela, the President said the government was “finally winning the war” against communist rebels.

“I think, if God will have mercy, the Communist Party of the Philippines (CPP) will be over by the second quarter of next year. There are many [rebels] surrendering, and the good thing is they bring firearms,” he said.

The Presient said many rebel fronts in Mindanao were falling, especially in the Davao and Agusan provinces.

“On the western part, they don’t have any strong fronts there because the Moros are there, and the Moros won’t allow them to become too powerful,” he added.

But CPP founding chair Jose Maria Sison said the President might have been taking too much fentanyl in claiming that the military was close to destroying the party and its armed wing, New People’s Army (NPA).

The President, he said, would more likely be ousted from office than succeed in ending the CPP-NPA insurgency by 2019.

“He is taking too much of fentanyl. Thus, he is pipe-dreaming. He forgets that the campaigns of mass murder, mass intimidation, fake surrenders and fake encounters under [the Armed Forces’] ‘Oplan Kapayapaan’ are angering the people and inciting them to intensify their resistance,” Sison claimed.

The President admits to taking fentanyl, which some experts said may be potentially addictive, to relieve body pains caused by a motorcycle accident a few years ago.

According to Sison, there is growing public discontent with the administration because of the soaring prices of basic goods and the imposition of “regressive” taxes.

The President made the remarks during his visit to the Army camp after presiding over a situation briefing on the damage caused by Typhoon “Ompong” in Isabela.

He cited the efforts of the 5th ID in convincing some 100 members of the NPA to surrender recently. The government recovered 45 firearms from the rebels.