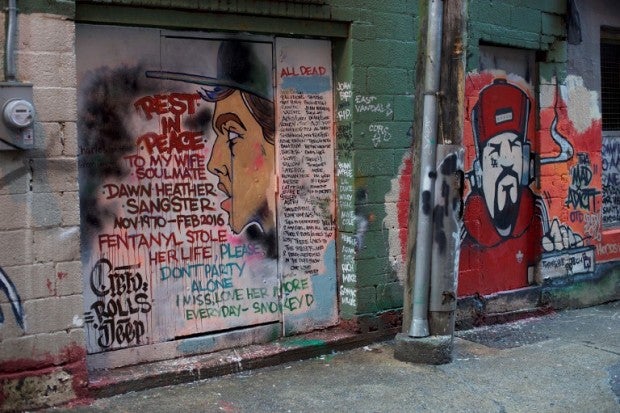 A mural in an alley in Vancouver’s Downtown Eastside, on December 21, 2016, painted by a man mourning the fentanyl overdose death of his wife, with names of other victims of the crisis that killed 128 people in British Columbia in November. AFP

OTTAWA, Canada – More than 1,000 Canadians died of an apparent opioid overdose in the first three months of this year, bringing the toll since the public health crisis erupted in 2016 to 8,000, the public health agency said Tuesday.

“The latest data suggest that the crisis is not abating,” the agency said in a statement.

“We want to emphasize that the current crisis does not discriminate,” it said. “It impacts people from all walks of life, all age groups and all socioeconomic backgrounds. However, it is clear that certain populations and regions are affected more than others.”

But the crisis is now also striking people who became addicted to prescribed painkillers before turning to street drugs and others experimenting with recreational drugs for the first time.

The westermost provinces of British Columbia and Alberta provinces continue to be hardest hit, said the public health agency.

Authorities have stepped up efforts to try to curb the number of opioid deaths, such as widely distributing naloxone kits to treat overdoses.

It is also considering regulating the popular painkiller tramadol as an opioid after seeing a spike in prescriptions — up 30 percent from 2012 to 2016, according to an analysis of opioid-prescribing trends released by the Canadian Institute for Health Information (CIHI).

But the latest figures from coroners and medical examiners show the battle is far from being won.

In August, British Columbia sued more than 40 drug companies to recover the costs of emergency paramedic responses and hospitalizations for overdoses.

Overprescribing and illicit sales of diverted painkillers have been widely blamed for the opioid crisis sweeping North America.

However, British Columbia alleges that drug companies such as OxyContin maker Purdue “deceived prescribers and patients about the risks and benefits of opioids,” which it claims has resulted in an “epidemic of addiction.” /cbb