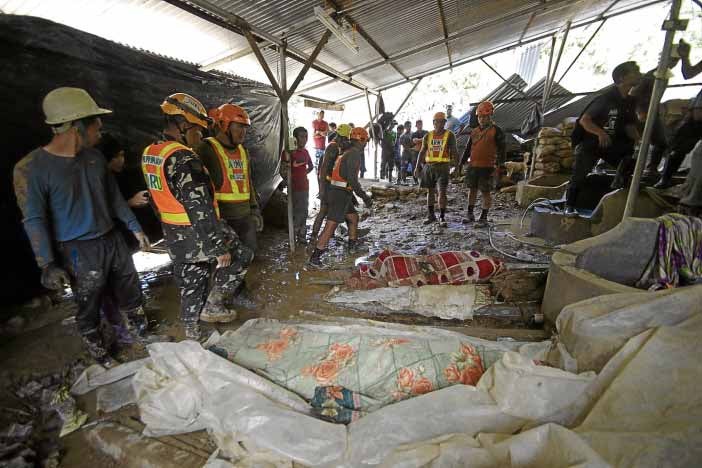 The death toll from Typhoon “Ompong” rose to 74 and damage to agriculture climbed to P14.27 billion as of Tuesday, according to the Philippine National Police and the Department of Agriculture (DA).

As of Tuesday, the PNP had received reports about 203 casualties — 74 dead, 55 missing and 74 injured — in Ilocos, Cagayan Valley, Cordillera Administration Region, Central Luzon and Metro Manila.

Most of the casualties — 60 dead, 52 missing and 42 injured — were reported in the Cordillera Administrative Region, a gold-mining area that saw dozens of landslides.

Police said the number of fatalities was expected to rise.

Up to 40 people are still feared buried in the landslide in Itogon, Benguet province, where Ompong stalled and dumped a month’s volume of rain in a matter of hours.

Because the landslide destroyed roads, authorities have been unable to bring heavy equipment into the area to accelerate the search.

As a result the teams were using human chains to extract debris.

The effort was getting progressively more difficult because the rain-soaked soil had started to harden in the scorching sun. Crews were using water to try to soften up the soil.

The area was primed for disaster before Ompong hit, as the landslide came on the heels of nearly a month of continuous monsoon rains that left the already hazardous area soggy and dangerously loose.

Many of those buried in Itogon were small-scale gold miners and members of their families who had taken refuge in a building abandoned by a large mining company.

Tearful families surrounded a white board bearing names of the dead and missing as others inspected recovered bodies in an attempt to identify their loved ones.

President Rodrigo Duterte on Monday night met with the families of some victims in Itogon. He distributed P25,000 worth of relief goods and burial assistance.

The Department of Labor and Employment has set aside over P44 million for an emergency employment program for those affected by Ompong in Cagayan Valley.

The labor department said it would give each affected resident P3,450 in exchange for 10 days of work, which includes clearing debris and repairing infrastructure.

Across northern Luzon, farms were flattened and flooded, with the authorities saying crop losses had risen to more than P14 billion.

That could add to inflation woes and worsen a spike in rice prices that has hit the poor hard.

Rice registered P8.97 billion in losses. A total of 435,997 metric tons were destroyed, equivalent to the country’s rice consumption for nine days, according to the DA.

Losses in high-value crops and livestock were placed at P788.13 million and P5.51 million, respectively.

Damage to the fisheries sector was estimated at P24 million.

Six SUCs in Ilocos suffered over P193.4 million worth of damage, with Mariano Marcos State University topping the list at P86 million.

De Vera said officials of Cagayan State University reported that almost all of the school campuses sustained damage, estimated at P215.3 million. Bearing the brunt were its Piat and Lal-lo campuses.

Read Next
Trillanes says he’s ready to go to Davao City to face libel case
EDITORS' PICK
House energy committee chair Arroyo bats for cheap electricity
WHO says monkeypox is not yet a health emergency
Guarding Sara: Why next VP is getting own security team
Beyond the Chocolate Hills: A farm-to-table, heritage culinary adventure of Bohol
A massive highway complex makes living in the South highly attractive
Metro Manila logged most number of new COVID-19 cases — OCTA Research
MOST READ
LOOK: Rita Daniela pregnant with first child
Bea Alonzo, under lie detector test, says she wants prenup agreement with future husband
Guarding Sara: Why next VP is getting own security team
2 foreigners die in Batangas
Don't miss out on the latest news and information.