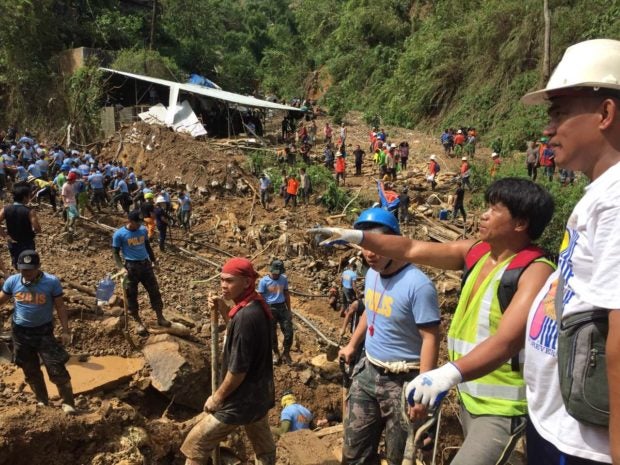 The death toll in the Cordillera Autonomous Region (CAR) due to Typhoon “Ompong” (international name: Mangkhut) climbed to 68 on Tuesday while another 68 are still missing, according to the Cordillera Regional Disaster Risk Reduction and Management Council (CRDRRMC).

As of 6 p.m., the CRDRRMC said 11 people died in Baguio City; one in Kalinga; six in Mountain Province; one in Tuba, Benguet; three in La Trinidad, Benguet; and 46 in Itogon, Benguet.

Meanwhile, four people are still missing in Baguio City and 64  in Benguet.

The Philippine National Police (PNP) earlier reported that 60 people have died in the Cordillera region.

Typhoon Ompong hit the country on Saturday and is the strongest typhoon this year, The Philippine Atmospheric, Geophysical, and Astronomical Services Administration (Pagasa) said. /ee

Read Next
UP warns vs fake info on new schedule for UPCAT 2019
EDITORS' PICK
Water remains our saving grace right now
Get 80% OFF Ignite 2020 Cyber Tickets starting 28 September
House to probe Facebook takedown of gov’t accounts
Smart poised to turn PH into ‘Smart 5G country’ with nationwide rollout
Feud is over: Velasco next Speaker on Oct. 14
Duterte meets with Cayetano, Velasco amid speakership issue
MOST READ
Velasco to take over as Speaker on Oct. 14
Duterte will ask Congress to abolish PhilHealth
Duterte meets with Cayetano, Velasco amid speakership issue
AMLC investigator says De Lima not involved in Bilibid drug trade
Don't miss out on the latest news and information.