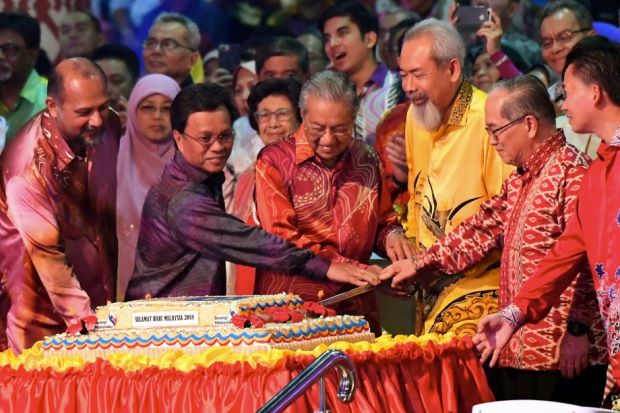 KOTA KINABALU — The status of Sabah and Sarawak as equal partners in the nation will be restored under the New Malaysia and Pakatan Harapan federal government, said the Prime Minister.

Tun Dr. Mahathir Mohamad said this is part of the process that will be implemented once the review on the Malaysia Agreement 1963 (MA63) has been completed.

In the past, Sabah, Sarawak, Singapore, and the Federation of Malaya had agreed to form a bigger family called Malaysia, said Dr Mahathir.

“During the formation of Malaysia on Sept 16, 1963, in the agreement that we call MA63, the four regions merged as equal partners.

“However, Malaysia has gone through a winding course since then and two years after its formation, Singapore exited.

“The years that followed also changed the status of Sabah and Sarawak from equal partners to states within Malaysia.

“The New Malaysia and the Pakatan government is aware of this and will restore the status of equal partners to Sabah and Sarawak,” said Dr Mahathir at the Malaysia Day celebrations at Padang Merdeka here on Sunday (Sept 16).

He said the restoration of the status of Sabah and Sarawak as outlined in the MA63 will provide a solid foundation to strengthen the relationship between Sabah, Sarawak and Peninsular Malaysia.

“The development needs of Sabah and Sarawak need to be given attention as there are still districts that are backwards and with poor infrastructure.

“The study on MA63 will also surely give rise to the need to review several things that were previously implemented.

“Our hope is that the reviews will be done with the spirit of loyalty, mutual respect and high tolerance amongst us,” he said.

Without such a spirit, the unity as a nation and one people will be eroded and the beauty enjoyed together all this while will disappear in the future, said Dr Mahathir.

The move announced is part of Pakatan’s promise to restore lost rights under MA63, which Sabah, Sarawak, Malaya and Singapore entered into to form Malaysia. Singapore was expelled in 1965.

Under the original Schedule 1(2) of the Constitution following the formation of Malaysia in 1963, Dr Mahathir said that the states of the federation would be the Federation of Malaya (with the names of the 11 states of Malaya placed in bracket), Singapore and Borneo states of Sabah and Sarawak.

In 1976, the constitution was amended to downgrade Sabah and Sarawak as the 12th and 13th state of Malaysia instead of equal partners.

“The Pakatan federal government will surely not forget its duties to Sabah and Sarawak and will find a way to develop the infrastructure according to the people’s needs and demands,” he added.