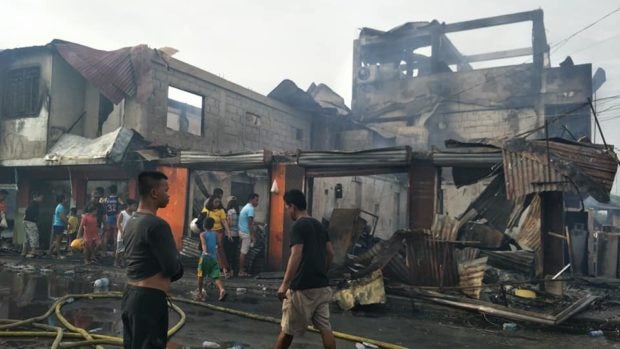 The five-hour fire at the public market in Oras, Eastern Samar destroyed 40 stalls and 13 houses located nearby on September 16, 2018.

TACLOBAN CITY— The  public market in Oras town in Eastern Samar province was destroyed on Sunday morning after it was ravaged by fire, the biggest to hit the municipality in more than two decades.

Oras Mayor Vivienne Alvarez said they were concerned that prices of basic commodities in the municipality might further increase since the blaze razed the entire market, including the 40 stalls that sold rice.

“This will really have an impact on our economic activity here in Oras. Among the stalls that were destroyed by the big fire were several rice retailers, to include those selling NFA rice,” she said.

The fire was the biggest to hit Oras since 1992 when the blaze affected half of the town proper.

Oras, a third class municipality with a population of 40,000, has an annual income of P140 million.

Reports said the fire broke out around 1 a.m. and was the fire was declared out four hours later.

Fire investigators had yet to determine the cause of the fire that also affected 13 houses located near the public market in Barangay Tuigib.

Fire stations in the towns of Balangkayan, Sulat, Salcedo, Taft, Can-avid, San Policarpo and Dolores and the city of Borongan sent fire trucks to help put out the fire.

Alvarez said at least P60 million worth of property was destroyed but now one was reported hurt.

The mayor also said she planned to place the town under a state of calamity and seek the help of other government agencies including the National Food Authority. /ee 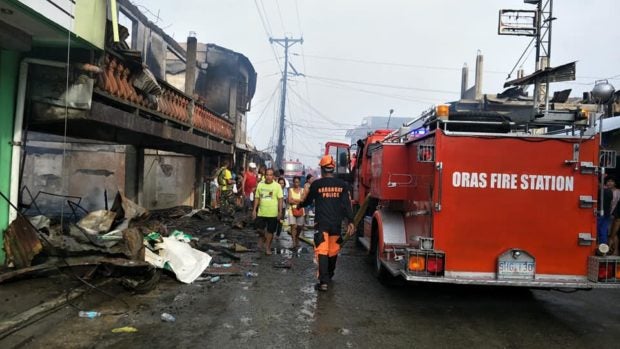 Fire stations in the towns of Balangkayan, Sulat, Salcedo, Taft, Can-avid, San Policarpo and Dolores and the city of Borongan sent fire trucks to help put out the fire in Oras, Eastern Samar on September 16, 2018.