US envoy on ‘CIA slay plot’: No efforts to undermine Duterte admin 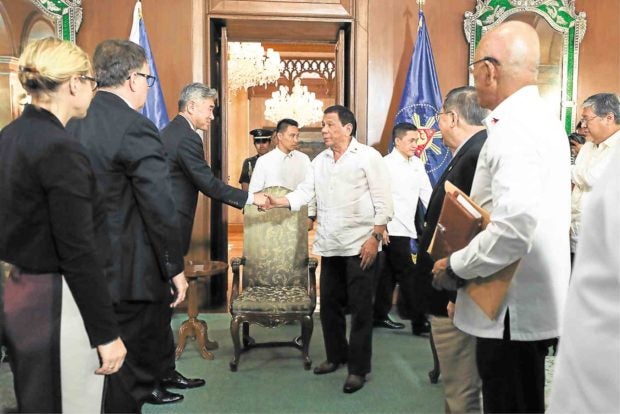 UNSCHEDULED US Ambassador Sung Kim meets with President Duterte in Malacañang on Wednesday night amid rumors of a destabilization plot. Kim had to skip the Aquino Awards that night due to the unscheduled meeting in which he reiterated Manila and Washington’s “very strong partnership.” —MALACAÑANG PHOTO

US Ambassador to the Philippines Sung Kim on Friday said there was no such thing as a plot by the Central Intelligence Agency (CIA) to oust or assassinate President Duterte.

“I can assure you with great confidence and conviction that there is actually no effort (on the part) of the US government, including the CIA, to come up with some efforts to undermine … President Duterte’s administration,” Kim said.

Kim, who spoke at the 10th US Embassy Seminar for Regional Media on Human Rights Reporting held in Pasay City, was reacting to earlier claims made by the President that the CIA wanted him dead.

The Philippine National Police has also denied any CIA-instigated plot to assassinate the President or destabilize his two-year-old administration.

In a press briefing on Thursday night, the President said the supposed plot would be set in motion on Sep. 21, the 46th anniversary of the declaration of martial law by the dictator Ferdinand Marcos.

“I said, maybe Sept. 21st, something, only a plan. But what I’m sure of is that there’s collaborative efforts (on the part) of the Left, the Magdalo and the Yellow. Some, but not all,” the President said.

He was referring to a supposed alliance among Left-leaning organizations, the Magdalo military faction that mutinied against the Arroyo administration and the Liberal Party.

“I said, I have no problem with that. I was elected by the people. I’m not a squatter there (in Malacañang),” the President said. “So eventually, the military and the police will have to face the crisis, the dilemma.”

Kim met with the President in Malacañang on Wednesday, but he said the discussion focused on bilateral relations and did not dwell on the CIA.

“I’ve seen those comments on media reports, but there is absolutely no validity [to these allegations],” Kim said, adding that the Philippines and the United States “continue to enjoy a very strong partnership that is of great consequence to both countries.”

In a televised tête-à-tête with Salvador Panelo, chief presidential legal counsel, on Tuesday, the President claimed that a foreign government had given him information about the supposed ouster plot.

He dared soldiers to join Sen. Antonio Trillanes IV, one of his fiercest critics, in ousting him.

Malacañang later explained that this was just the President’s way of expressing his confidence that no one would join Trillanes, whose amnesty he voided earlier this month.

Holed up in the Senate since last week, Trillanes has challenged in court the President’s Proclamation No. 572 that voided the senator’s amnesty granted in 2011 by then President Benigno Aquino III and ordered the former mutineer’s arrest.

In terms of military cooperation, Kim said Manila and Washington had been working closely with the Philippine military in combating human trafficking, piracy and terrorism.

“We have a very strong cooperation with all the security agencies, and it will continue,” Kim said.

He also said the President’s pronouncement would not affect the military cooperation and bilateral talks between the Philippines and the United States, and that the latter would want to work with the Duterte administration on a “full range of issues.”

“Leadership dynamics matter in any relationship [and] I’m happy to report President Duterte and US President Donald Trump have a very good relationship and communicate effectively,” he said.

The diplomat also noted that the military alliance between the Philippines and the United States was bolstered recently by the counterterrorism support given to government troops in their operation to free Marawi City from Islamic State-inspired militants last year. —Reports from Karlston Lapniten, Divina M. Suson and Julie M. Aurelio