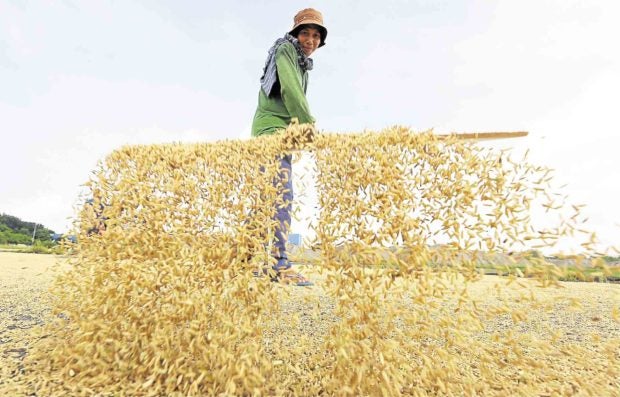 LOCAL SUPPLY A farmer dries palay in Pulilan, Bulacan province, in a sign of good harvest amid rising prices. Government plans to import more rice are likely to have an adverse effect on local farmers. —NIÑO JESUS ORBETA

The Department of Trade and Industry (DTI) is proposing to import 150,000 metric tons of rice, as increases in the staple’s prices were being largely blamed for a record inflation rate in August.

In a statement on Friday, the DTI said this would be done through its attached agency, the Philippine International Trading Corp. (PITC), to augment the current supply of the National Food Authority (NFA).

The NFA Council, however, has yet to approve the plan. The council is the NFA’s policymaking body.

Trade Undersecretary Ruth Castelo, who is also part of the council, said PITC was on standby until it got clearance.

If approved, she said the imported rice — equivalent to 3 million bags — was expected to arrive by December.

These would be sold to consumers for P27-P32 per kilogram. The DTI did not say where it would import the rice from.

Poor Filipinos have been waiting in line for NFA rice, which costs lower than commercial rice being sold at an average of P43 per kg.

But delays in NFA’s importation schedules and shipments have made the wait even longer.

This developed as prices of basic goods and services last month reached their highest in close to 10  years.

Rice, which has grown more expensive, helped push inflation to 6.4 percent in August.

It remained to be seen if the NFA Council would approve the DTI proposal, especially after it had already approved an order to purchase 250,000 MT of rice.

NFA’s manner of importing the 250,000 MT of rice differed from that which PITC would like to pursue.

The 250,000 MT of rice would be purchased through an open tender scheme, wherein private suppliers were allowed to participate in the bidding and would be covered by the procurement law.

Cabinet Secretary Leoncio Evasco had described this as the option that was more competitive, transparent and least corrupt.

PITC, the country’s premier government-controlled trading corporation, would import through a government-to-government deal. This has no bidding, although it was considered as the fastest way to import rice.

“NFA’s strategy to flood the market with affordable rice is laudable, but an open tender scheme might take a longer time to implement,” DTI said in its statement.

The DTI said PITC will implement “strategies” to lower the price of rice “even before imported rice reached the country.” The DTI did not elaborate on those strategies.