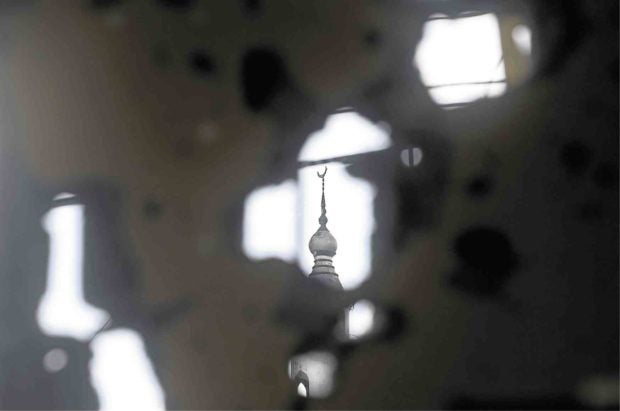 REMNANTS OF WAR The war on terror in Marawi, the main reason for martial law’s declaration, all but wiped out the country’s only predominantly Muslim city. —AP

KORONADAL CITY — Activists painted a picture of martial law in Mindanao different from the one presented by President Rodrigo Duterte in a televised conversation with his chief legal counsel and urged the Commission on Human Rights (CHR) to release its report on the effects of military rule on people’s lives in the island.

Early this week, the President and Salvador Panelo, presidential legal counsel, in a televised conversation that Malacañang called “tête-á-tête,” said martial law in Mindanao “has lessened criminality by and large.”

The President said his detractors could easily check his claim “and the only way to do that is to conduct a survey among the people of Mindanao.”

What the President apparently missed was the existence of a survey on martial law in Mindanao showing that more people were opposed to extending military rule than those who favored it.

A similar survey conducted by Ateneo de Davao University, where the President studied in high school, showed that 59.8 percent of respondents did not support the extension of martial law.

Amper said the President’s claim about criminality easing as a result of martial law was “sheer lies.”

In a statement, Amper asked the CHR to make public the results of its investigation on the effects of martial law on Moro, “lumad” and farmers.

He said cases of human rights violations increased against the three sectors.

Barug, according to Amper, had documented at least 77 cases of political killings, enforced evacuations displacing nearly 500,000 people and the filing of trumped up charges against 686 activists.

While the CHR, an independent government agency under fire from Malacañang, has yet to make its findings public, it warned the Duterte administration against violating rights in the enforcement of martial law.

Among the cases which the CHR was known to have investigated included the killing last December of eight tribal leaders, accused by the military of being communist rebels, in the village of Ned in Lake Sebu, South Cotabato.

The CHR also investigated the displacement of more than 1,600 people in Lianga, Surigao del Sur province, in July as a result of military buildup in their village.

The CHR classified the killings in Lake Sebu as the first “martial law-related case in central Mindanao.”

The agency also criticized the food blockade imposed in an evacuation center where lumad from Lianga fled.

Martial law would be in effect in Mindanao until the end of the year after Congress agreed to the President’s request for a one-year extension.

Palace officials, however, had broached the idea of extending martial law further.

Ledesma, in a report on the website of Catholic Bishops’ Conference of the Philippines, said martial law was a scary thought for investors.

“There are less investors because of that,” the Church official said.

Dela Peña said the first extension of martial law should have been limited only to Marawi to facilitate the reconstruction of the ravaged city.

Amper urged the people of Mindanao to take to the streets on Sept. 21, the 46th anniversary of the late dictator Ferdinand Marcos’ martial law declaration, to protest ongoing military rule in the island.

“Let us take a stand for life and for people’s rights and rebuke Duterte’s dirty wars,” he said.