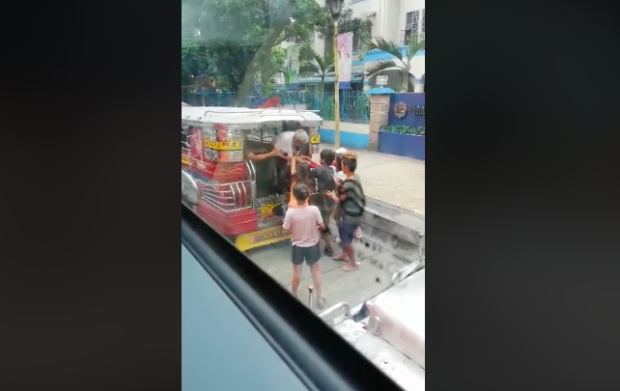 Street kids have struck again, this time along Taft Avenue corner Pedro Gil in Manila, where they ganged up on a jeepney passenger and tried to grab a valuable item from him on Friday afternoon.

Nathaniel Javier Jamolin caught on video some street kids grabbing the passenger—an old man—in a jeepney. Some other passengers got away from the vehicle to avoid the commotion.

Moments later, the group started to grab something from the man who held tight on the item, refusing to let it go. The group then beat the man, but he managed to hold on to his bag.

Jamolin told INQUIRER.net that he decided to take the video when he noticed that the kids packed themselves inside the vehicle. “[A]kala ko ung mga nanghahablot na mga bata, pero yung isang bata po may hawak na malaking barbecue stick,” he said. He was in a bus on his way to work when the incident happened.

(I thought these were the kids who would grab stuff from you, but I noticed one who was holding a long barbecue stick.)

“May isang lalaking talagang pinapasok [yung] isang bata [sa jeepney] (There was one man who instructed one kid to get inside the jeepney),” Jamolin said. He added that what the man was grabbing on to was an eco bag, but noted that he was not sure if it contained money.

One fellow passenger tried to get hold of the man from the kids. According to Jamolin,  one kid took a heavy strike on the man’s head and back when he was already on the ground while they were fighting over the eco bag.

He also noticed that no one dared to help the man during the incident. After the video was taken, he said that the kids still tried to chase the man down the street.