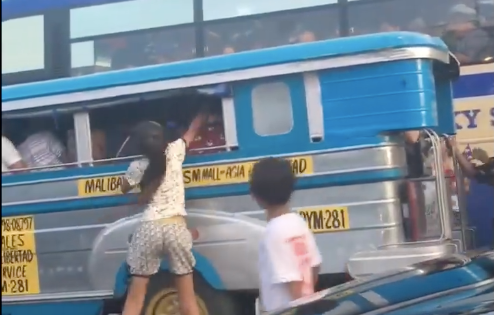 A group of street kids was found harassing and robbing passengers inside one jeepney in Macapagal Avenue last Sept. 8. The commotion was captured on video by witness Victor Bagatcholon III, who was inside a taxi across the jeepney with his mother and cousin.

Bagatcholon shared the video on Facebook on Sept. 8, writing that the group of kids entered the jeepney while the stoplight was on red. In the video, the kids can be seen crowding around the jeepney, with one jumping out with a pack of chips in hand. The passengers inside can be heard screaming until one girl went over to the left side of the jeepney and pulled the hair of a woman, who was carrying a child.

(The kids begging for alms went inside the jeep. There were about 12 to 15 of them in the group. Suddenly there was a commotion in the jeep. The kids were able to steal from the passengers and one mother, who was with her child, was also affected).

Bagatcholon told INQUIRER.net today, Sept. 11, that he first noticed the kids from afar under a tree.

“I first noticed those kids hanging out under a tree, there were about 12 to 15 of them,” said Bagatcholon. “When the stoplight hit and the cars slowed down, the group went inside the jeep, I believe they were asking for alms [because] my cousin said they handed out a box.”

Bagatcholon shared that the kids got rowdy after a few seconds and the passengers inside the jeepney started shouting. Bagatcholon then said that one of the kids, a girl with cropped hair, got off the jeepney and started hitting the woman with a child. The kid, too, started banging on the jeepney’s sides.

Bagatcholon further told INQUIRER.net that there were other kids who hit the woman. All of this happened before Bagatcholon took the video. 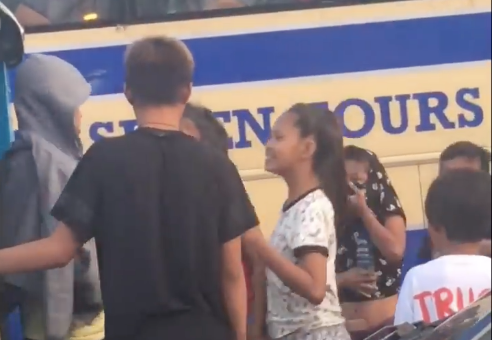 Some of the kids standing outside the jeepney. Image: Screengrab from Facebook/Victor Padilla Bagatcholon III

As per Bagatcholon, the kids “stole junk food and a piece of clothing from the passengers.”

Bagatcholon also said that there weren’t any law enforcers around the area to quell the ruckus.

He said, “Everyone was in their cars. There was a bus though, but no one ever tried to stop them. Not even the jeepney driver went down to reprimand them, he just looked back at the commotion.” NVG