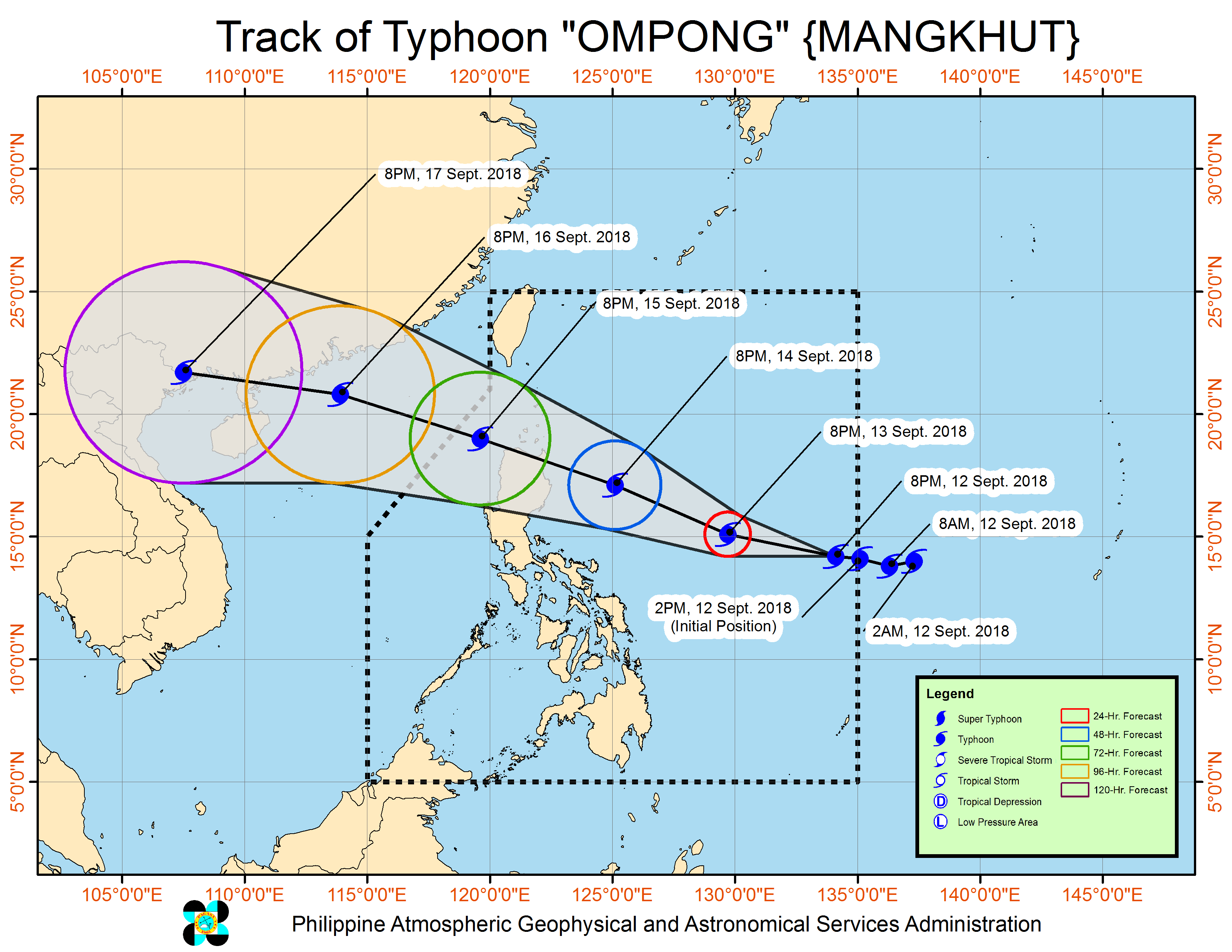 Typhoon “Ompong” further intensified as it entered the Philippine area of responsibility on Wednesday afternoon, growing in diameter from 600 kilometers on Tuesday to 900 km and prompting more areas to take precautionary measures.

“There is still a possibility that it will reach the supertyphoon (category),” said Vicente Molano, administrator of the Philippine Atmospheric, Geophysical and Astronomical Services Administration (Pagasa).

Packing sustained winds of 205 kilometers per hour and gusts of 255 kph on Wednesday, “Ompong” (international name: Mangkhut) is forecast to strengthen to 220 kph on Thursday, enabling the Philippine Atmospheric, Geophysical and Astronomical Services Administration to categorize it as a supertyphoon.

At 4 p.m. on Wednesday, the typhoon was tracked at 1,145 km east of Virac, Catanduanes province, moving westward at 20 kph.

Ompong is expected to make landfall in northern Cagayan province or the Batanes group of islands on Saturday, but it will bring stormy weather to most of Luzon as early as Friday, according to weather specialist Gener Quitlong.

Pagasa raised Storm Signal No. 1 in Catanduanes on Wednesday afternoon and in southern Luzon on Thursday.

Forecasters warned residents in the coastal villages along the eastern seaboard of Luzon to brace for storm surges of up to 6 meters.

The dangers posed by Ompong have prompted the authorities, schools and residents to take a number of measures: 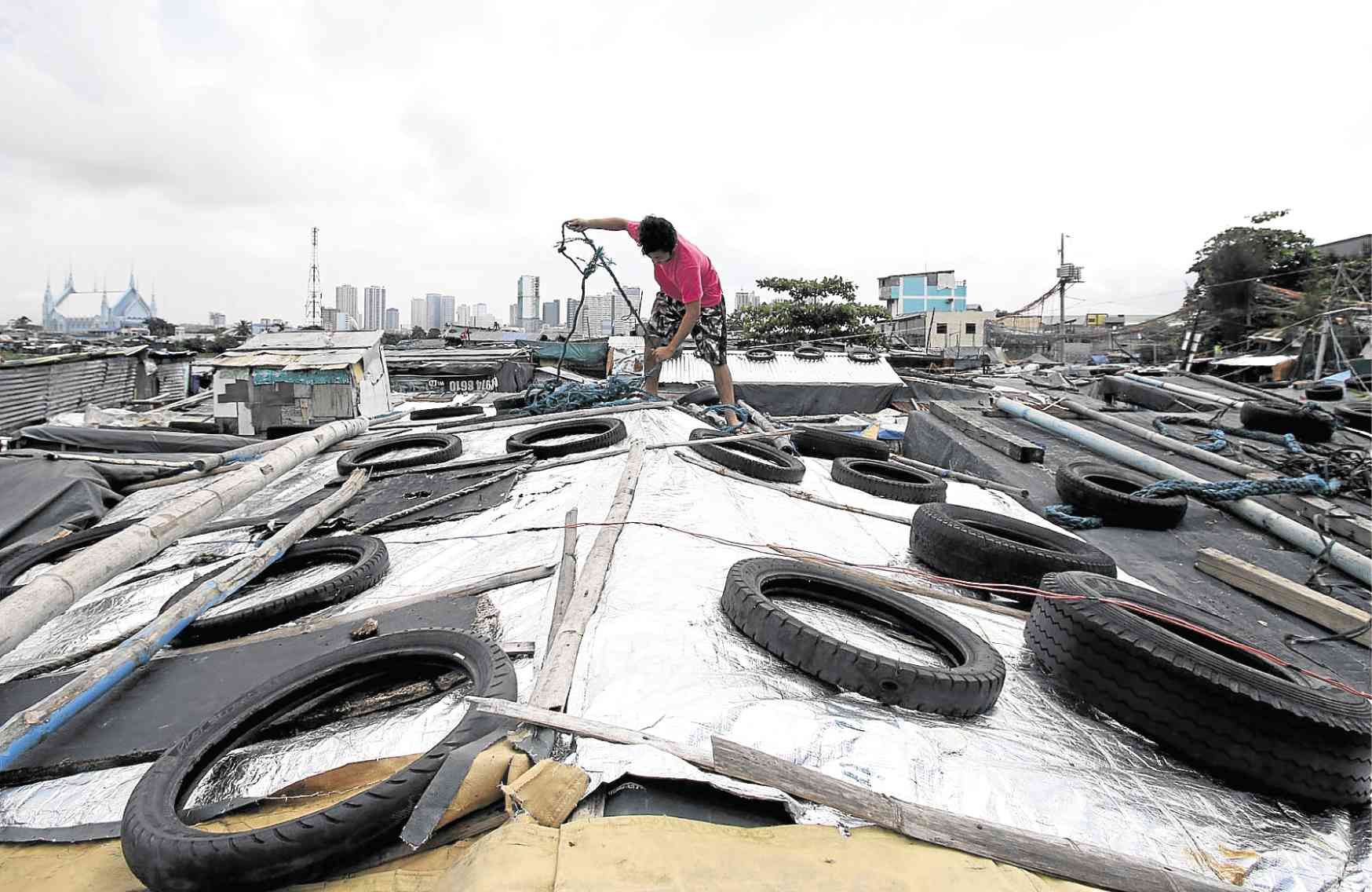 TYPHOON-READY Anticipating the possible onslaught of Typhoon “Ompong,” residents of Baseco compound (top photo) along Manila Bay secure the roofs of their houses while workers (below) take down billboards along Edsa in San Juan City. —RICHARD A. REYES/LYN RILLON 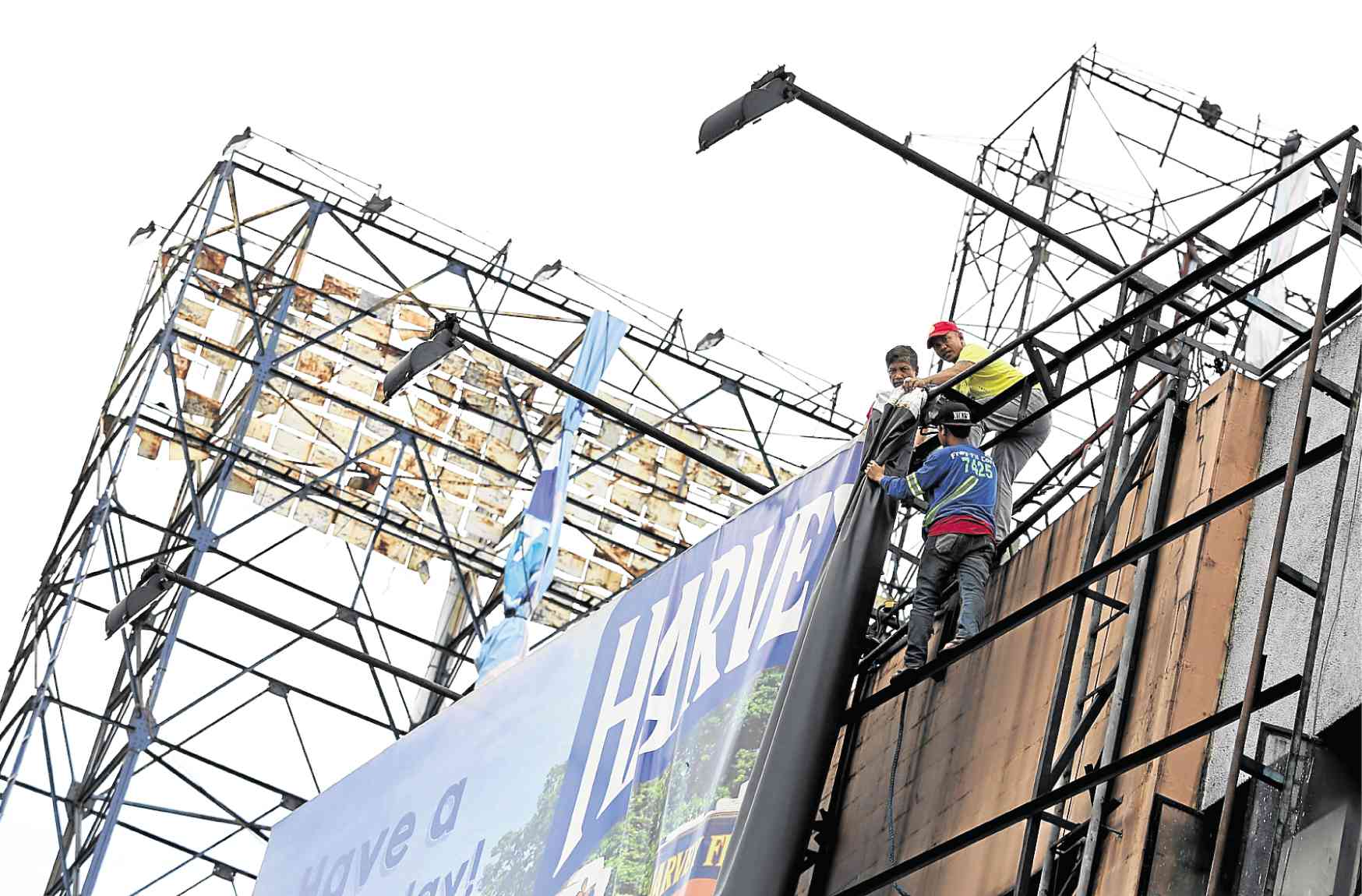 The outer bands of Ompong could extend to Metro Manila and the rest of Luzon, bringing strong winds and heavy rain, according to Pagasa.

Other parts of Luzon and portions of the Visayas and Mindanao will experience rain brought by the induced monsoon.

“We reiterate that we expect strong winds, heavy rains, severe flooding and landslides with this typhoon,” Solidum said.

“We ask our people in vulnerable areas to  check out possible evacuation sites, and get set to flee from their homes whenever necessary,” he added.

He also warned residents living on mountain slopes of the risks of landslides.

At a press briefing on Wednesday, Executive Director Ricardo Jalad of the National Disaster Risk Reduction and Management Council (NDRRMC) said the council had crafted three waves of response.

The first wave of responders will come from local governments and the second wave from the Regional Disaster Risk Reduction and Management Office (DRRMO).

The third wave involves the DRRMO in areas outside the affected areas and the national agency.

Piñol said on his Facebook page that his office was expecting about 1.2 million hectares of rice and corn farms to be devastated.

Rice and corn losses may amount to P3.3 billion and P4.2 billion, respectively, since these crops were mostly ready for harvest, he said.

In Isabela province, Romulo Caspe said he quickly harvested his palay produce in Barangay San Antonio as a precaution.

At the farming village of Bungcag in Dingras town, Ilocos Norte, Jude Valencia and his nephew, Lyndon Madrid, plucked green papayas so they could sell these in the market for P15 a kilogram.

Valencia said he feared that his 500 papaya trees may not withstand Ompong. His solution was to peel off the leaves to help the trees recover once Ompong barreled out of the country.

“One optimistic thing about this typhoon is that it may be weakened once it hits the Sierra Madre mountain range (in Isabela), which usually serves as a natural barrier,” Pagasa’s Molano said in a press briefing.

“Also, the seabed along the coastal areas in Cagayan and Isabela is relatively deep, which could help minimize the occurrence of storm surges,” he added.