All others given amnesty must be arrested then–Aquino 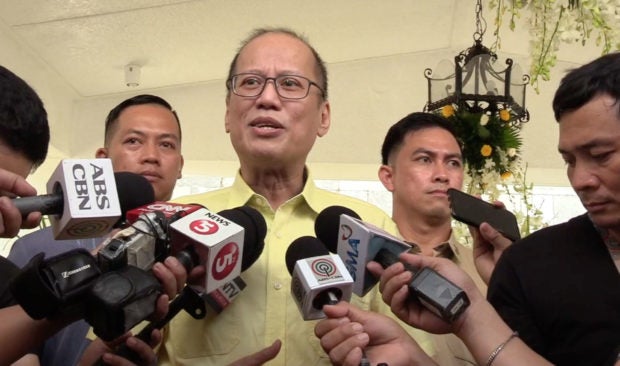 If the amnesty granted to Senator Antonio Trillanes IV is flawed, then all those given the same, including those appointed by President Rodrigo Duterte, should also be ordered arrested.

Former President Benigno Aquino III raised this argument on Monday amid allegations that it was former Defense Secretary Voltaire Gazmin, who recommended and granted the amnesty to Trillanes.

But Aquino vehemently denied the allegations.

He pointed out that in his Proclamation No. 75, he himself granted the amnesty to Trillanes and others who participated in three failed uprisings during the time of then-President-and-now-House Speaker Gloria Macapagal-Arroyo.

The former leader even read a portion of the proclamation, which specifically says that: “I, BENIGNO S. AQUINO III, President of the Philippines, by virtue of the powers vested in me by Section 19, Article VII of the Philippine Constitution, do hereby DECLARE and PROCLAIM— Number 1, the grant of amnesty.”

The proclamation, he said, also provides that the Department of National Defense (DND) would process the application for amnesty.

“Assuming tama yung sinasabi nila na flawed ang buong proclamation o di lahat nang nabigyan ng amnesty to include the people that he (Duterte) has hired , he has appointed are also para bang subject to the same arrest order as Trillanes by virtue of the equal protection rule…” Aquino said.

Duterte has issued Proclamation No. 572 , which voided the amnesty granted to Trillanes and subsequently ordered his arrest.

He noted that it had been the practice in the past that the president issued the proclamation for amnesty and the DND processed and implemented it.

The former leader believes Duterte was “ill-advised” when he revoked Trillanes’ amnesty on the bases of the latter’s supposed non-application of amnesty and non-admission of guilt on the crimes he committed.

“Ang paniwala ko parang mali to take effect an order with an effect of a law applicable only to one person and the basis is also flawed .Therefore, the whole proclamation is flawed and should be withdrawn,” Aquino added. /cbb