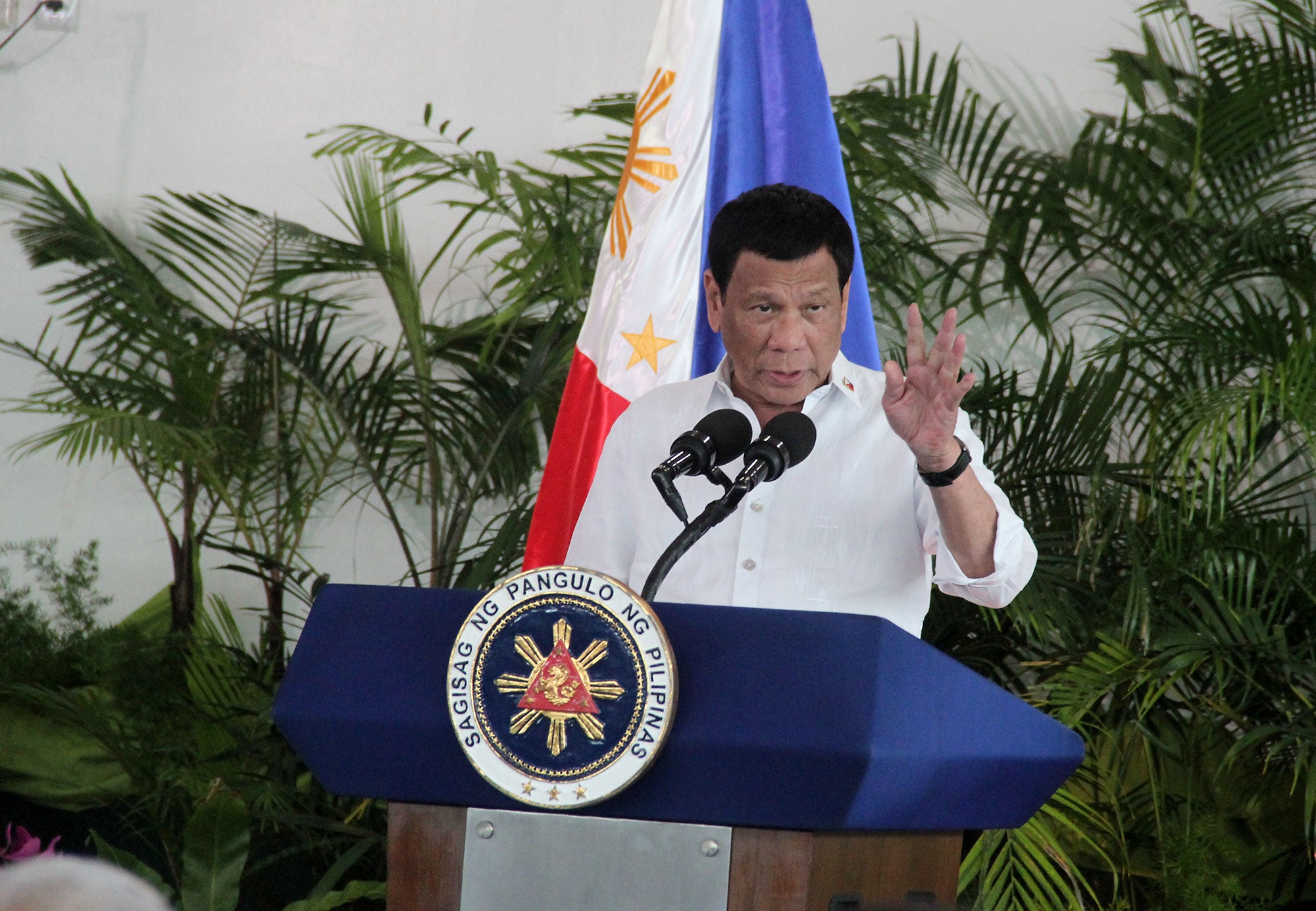 President Rodrigo Duterte arrives at Davao City International Airport at around 11 in the morning today from his state visit in Jordan and Israel. PHOTO BY BARRY M. OHAYLAN

DAVAO CITY —  President Duterte said Saturday the flaw surrounding the  amnesty given to his critic Senator Antonio Trillanes IV was traced to former Defense Secretary Voltaire Gazmin, who himself recommended and approved the amnesty for the mutineer, a sole duty he described only of the President under the country’s Constitution.

Speaking at the Davao International Airport here from his trips to Israel  and Jordan, Mr. Duterte revealed it was Solicitor General Jose Calida who did the research to support his issuance of Proclamation 572, which voided the amnesty granted to Senator Antonio Trillanes IV.

“Ang totoo niyan ang nagresearch si Calida, like ‘yung kay Sereno,” he said, referring to Ma. Lourdes Sereno who was ousted from the Supreme Court through a quo warranto petition filed by Calida.

“Ito ngayon ang problema. It was Gazmin, whom probably one of those who investigated … then recommended and approved for the amnesty. Ganun yan eh. I hope that it would not get this far.  Remember we did not start the ruckus,” the President added.

President Duterte explained the granting of pardon and amnesty as the constitutional mandate of the President.

“It cannot be delegated to anybody else,” he said.

“Pag sinabi ng Solgen may mali, it has to be corrected. I cannot refuse. He is a government lawyer. I cannot insist in the view of the fact it was already recorded as a public paper. Kung sinabi nya, paniwalaan ko,” the President added, referring to Calida.

Duterte said Gazmin had been his friend. Whenever the former military official was in Davao City when he was still the mayor, they talked and drunk.

But Gazmin had explained earlier that the amnesty of Trillanes and other former mutineers went through the proper course.

President Duterte has voided the amnesty given to Trillanes, one of his fiercest critics, via Proclamation No. 572 issued on August 31, citing alleged failure of the legislator to file an application for amnesty and express admission of guilt.

The senator was absolved for his involvement in two failed mutinies in 2003 and 2007, which was staged to protest the alleged corruption during the presidency of Gloria Macapagal-Arroyo, and was granted amnesty — along with other mutineers — via Proclamation No. 75 issued by Aquino. Mrs. Arroyo is now the Speaker of the House of Representatives.

ADVERTISEMENT
Read Next
Cafgu member kills bro, sis-in-law over stolen bananas
EDITORS' PICK
COVID-19 has infected more than 69,000 people globally
Xi’s early involvement in virus outbreak raises questions
The Najima Drive: Nissan’s MD drives #GoAnywhere adventures in new video series
Can Your Brand of Meat Be Trusted? Here’s How to Know You’re Eating Safe Meat
COVID-19 screening checkpoints remain for those going to Boracay
Can travel make you fall in love?
MOST READ
2,000 iPhones given for free by Japanese gov’t to passengers stuck on ship due to coronavirus
WATCH: Sarah Geronimo dances ‘fierce’ version of ‘Tala’
COVID-19 has infected more than 69,000 people globally
NBA loses ‘hundreds of millions’ in China over Hong Kong tweet
Don't miss out on the latest news and information.