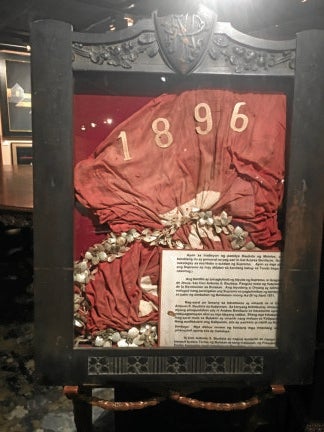 AUCTION ITEM Andres Bonifacio’s “personal flag” was auctioned off by Leon Gallery on Saturday. The hero’s wife, Gregoria de Jesus, gave the flag as a gift to Antonio Santos Bautista in 1931,which was passed on to Bautista’s descendant Dez Bautista.

Despite a last-minute appeal from the National Historical Commission of the Philippines (NHCP) to stop Saturday’s auction, the “personal flag” of Katipunan founder and revolutionary Andres Bonifacio, sewn by his wife, Gregoria de Jesus, was sold by Leon Gallery for P9.3 million.

The final bid for the relic was more than nine times the floor price of P1 million.

The flag had been gifted by Bonifacio’s widow herself to Antonio Santos Bautista of Malolos, Bulacan province, on the occasion of the 33rd anniversary of the Malolos Congress in 1931.

It was passed on to Bautista’s descendant Dez Bautista, a leading Malolos designer, scholar and heritage conservationist.

The sale pushed through despite NHCP’s “appeal” because the flag and other historical documents and relics on auction were “privately owned” and “we have an obligation to the consignors,” said Leon Gallery director Jaime Ponce de Leon.

Ponce de Leon added that the wide interest generated by the sale indicated renewed appreciation by Filipinos of their history that should be encouraged.

“I am privileged to say that the great public interest—and the high prices—in the Leon Gallery historical auctions have brought so many of these fantastic documents and objects out at last from the closed doors and bank vaults of a few collectors.”

Leon Gallery declared the auction “a triumph of Philippine history.”

Other historical relics associated with Bonifacio and the secret movement he founded that led the Philippine Revolution of 1896 likewise triggered fierce bidding and fetched high prices.

A handwritten Decalogue or 10 Commandments that could have been penned by Bonifacio himself, along with his only extant photograph, showing him on his wedding day, was sold for P2.7 million.

Katipunan membership documents were sold for P818,000 while a very rare brass medallion worn by members of the Katipunan supreme council was sold for P876,000.

All of the Katipunan documents and paraphernalia came from the collection of historian Epifanio de los Santos, after whom the Edsa highway is named.

Epaulets and other military heraldry designed by the Luna brothers Antonio and Juan for the Philippine revolutionary forces fighting the American invaders were sold as a lot for P5.1 million.

A letter by Jose Rizal to a Scottish trader in Manila in the 1880s fetched P1.4 million while a letter by Josephine Bracken to Emilio Aguinaldo got P1.05 million.

The final bids in the main section of the auction on the visual arts were even more fabulous.

The huge “Nose Flute,” said to be the last “epic painting” by muralist and National Artist Carlos “Botong” Francisco, was sold for P63 million, more than double the floor price of P28 million.

Ponce de Leon defended the auction as he disclosed that Leon Gallery had received “letters” from the NHCP “appealing to stop the sale of the historical documents.”

“But we also have an obligation to the consignors as they are all privately owned property hence we decided to push through with the sale,” he explained.

In March, Leon Gallery had also auctioned off four important letters of Bonifacio related to the controversial Tejeros Convention in Cavite of 1896 that signaled a deadly rift in the revolutionary movement and led to his killing by supporters of Emilio Aguinaldo.

Government moves to stop auctions of historical documents are counterproductive, according to Ponce de Leon.

He said collectors would not come out and important documents and relics of history would not be seen by the public.

“I believe that the auctions and especially the prices achieved have encouraged collectors to bring out numerous historical surprises that even historians are amazed to realize their existence,” he said. “It also brings about more documentary evidence and information on our history.”

“There are numerous letters and documents that complete the missing puzzles in what we know of our past,” he added.

“If we curtail this or put fear on would-be consignors in bringing forth what they have, then it will just prevent us from seeing more of our history.”

Ponce de Leon said historian and Inquirer columnist Ambeth Ocampo, himself a former chair of the NHCP, had said that government did not need the original documents, “but the facsimile copies should suffice.”

Another Inquirer columnist, Antonio Montalvan II, a former head of the museums committee of the National Commission for Culture and the Arts, had also said historical documents were better off in private hands.

“In fact, these private collectors had made the letters available to researchers for free and precisely had been previously published because of such munificence by (their) private owners,” he said. “The law does not prohibit private ownership.”

Montalvan and Ocampo pointed out that Leon Gallery had published the documents to be auctioned in its catalogues that would be available to the public.

“Conservation is not a monopoly capacity of public cultural agencies,” Montalvan said. “Several topnotch private cultural institutions like the UST Archives, which keeps the ancient ‘baybayin’ syllabary that has been declared a National Cultural Treasure by the National Archives of the Philippines, are better equipped at conservation work.”

Ponce de Leon agreed. “Let the originals be with private collectors who could probably be better custodians of these things and who will employ utmost conservation on them.”

Montalvan pointed out that the Leon Gallery auctions had stimulated debates about Philippine history.

“The auction has sparked new discussions if Bonifacio is our first president,” he said. “Let debates arouse pedagogy. By sensitizing public interest alone, the auction has shown the way at dealing with historical treasures.”

“Now the general public has the chance to see them, learn about the secrets and behind-the-scenes stories,” he said. “Without these auctions, these memorabilia would be hidden away.”