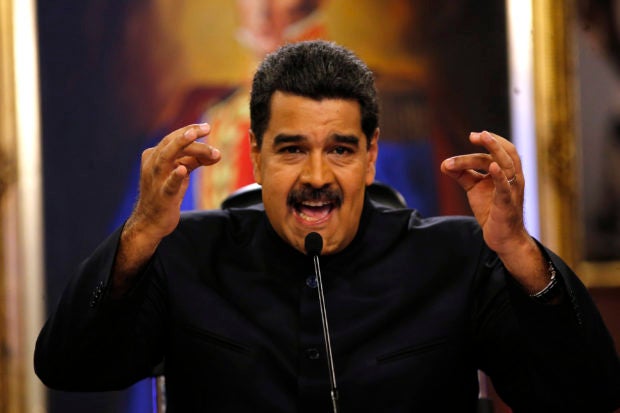 US President Donald Trump has been harshly critical of Maduro’s leftist regime, as Venezuela has spiraled downward into a grave economic and humanitarian crisis that has sparked violent protests and prompted a wave of emigration into nearby countries.

“The United States government hears daily the concerns of Venezuelans from all walks of life . . . They share one goal: the rebuilding of democracy in their homeland,” said spokesperson Garrett Marquis.

“A lasting solution to Venezuela’s worsening crisis can only arise following restoration of governance by democratic practices, the rule of law and respect for fundamental human rights and freedoms,” he added.

“Right there in US media, new and disgusting evidence is there to see,” he said.

After drones laden with explosives blew up near Maduro at an Aug. 4 event in Caracas—he blamed the United States, Colombia and his domestic enemies—the US state department condemned the “political violence” but also denounced what it said were the arbitrary detentions and forced confessions of suspects.

‘No US gov’t involvement’

US National Security Adviser John Bolton insisted there was “no US government involvement” in the incident.

In August 2017, media reports said Trump asked top advisers about the potential for a US invasion of Venezuela.

Around the same time, he said publicly that he would not rule out a “military option” to end the chaos there.

The Venezuelan military commander is one of many on the US government’s list of sanctioned Venezuelan officials accused of serious crimes, according to the Times.

The former commander told the Times at least three factions within the Venezuelan military were plotting against the Maduro government.

The Times reported that one such rebel group made initial contact with the US government through an American Embassy in a European capital city.

White House officials in Washington were at first worried that the meeting request was a setup in order to record a US official appearing to conspire against Maduro’s government, the Times reported.

But US officials finally felt the meetings were worth the risk as they watched the crisis in the Latin American country worsen, the Times reported.

The Trump administration sent a career diplomat with instruction to attend the meetings “purely on listening mode” and not to negotiate, a senior administration official told the Times.

From their first meeting held abroad in fall 2017, the diplomat made the assessment that the Venezuelan rebels did not appear to have a detailed plan, but instead were hoping the American government would provide guidance or ideas, the Times reported.

The former Venezuelan commander told the Times that the officers never sought US military intervention: “I never agreed, nor did they propose, to do a joint operation,” he told the newspaper.

But senior officials declined the request, according to the newspaper. —Reports from AFP and CNN