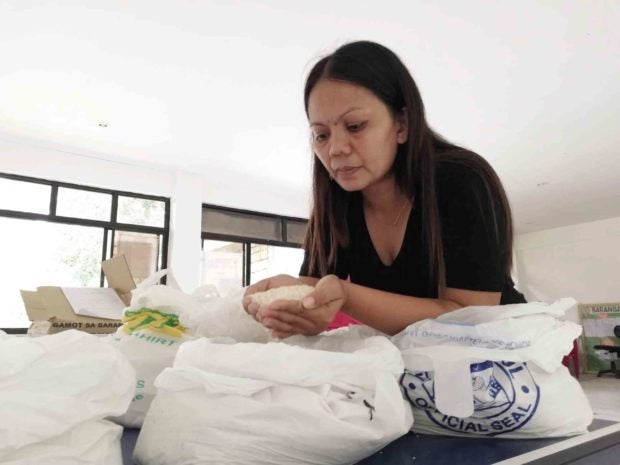 SEE NO WEEVIL Marilyn Ybañez, village secretary of Moto Norte, examines rice returned to the village hall after residents complained it had a foul odor, was blackish in color and was infested with “bukbok,” or weevils. —Leo Udtohan

TAGBILARAN CITY — The “bukbok,” or weevil, found in rice given to residents of Loon town, Bohol province came from buffer stock of the provincial government, according to results of an investigation ordered by Gov. Edgar Chatto.

A two-page report on the investigation said the infested rice, part of the stock being kept by the Provincial Social Welfare and Development Office (PSWDO), was released according to the provincial government’s “first in, first out” policy of distributing food aid.

Stocks that arrived first should be the first to be distributed, according to the policy.

Although the infested rice had been in the provincial government warehouse only since July, local officials were unaware that this had already been contaminated by weevils, the report said.

The PSWDO had prepared packs with 5 to 6 kilograms of rice each and stored these in the warehouse ready for distribution.

The report, however, did not say how many bags of rice were in the warehouse and had been distributed at the Loon leg of the provincial government’s HEAT Caravan on Aug. 30.

For the HEAT Caravan in Loon, the provincial government, through PSWDO, purchased 1,040 bags from the National Food Authority (NFA).

The Loon municipal government bought 112 sacks of rice also from NFA for the HEAT Caravan.

Maria Fe Evasco, NFA Bohol manager, said rice from the NFA didn’t have weevils because the stock was new.

She said the rice distributed for the caravan in Loon town was of good quality.

The HEAT Caravan, which is being held every two months in different towns, is the flagship program of Chatto to reduce poverty in Bohol.

HEAT stands for Health and Sanitation, Education and Technology, Agriculture and Food Security and Tourism and Livelihood.

At least 9,520 food packs had been given to beneficiaries in Loon—8,653 packs from the province and 867 from the municipality.

But several residents complained that the rice was infested with weevil. It was smelly and dark-colored, prompting Chatto to launch an investigation.

Most of those who received bukbok rice were from the village of Moto Norte, which received 294 packs during the caravan.