Over a dozen houses damaged in Davao Oriental quake 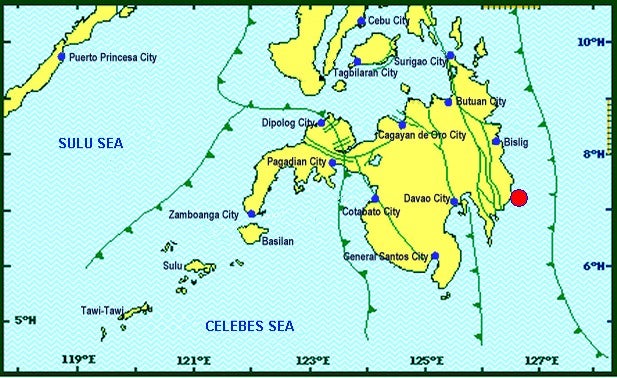 DAVAO CITY — Over a dozen houses were damaged by the magnitude 6.4 quake that struck Davao Oriental on Saturday, authorities on Sunday said.

Most of the damaged houses were in the town of Tarragona, where one house was totally destroyed and 10 others partially damaged, said Karen Deloso, Davao Oriental provincial information officer.

Heavy equipment were promptly sent by the Department of Public Works and Highways (DPWH) to clear the road of boulders and other debris.

In Manay town, where the quake’s epicenter was traced some 28 kilometers off its coast, residents promptly evacuated even as state seismologists said the temblor was not shallow and powerful enough to trigger a tsunami.

In the capital city of Mati, 73 kilometers south of the epicenter, one house collapsed into the sea and four others were damaged at the coastal community of Magsaysay.

Patients of the Davao Oriental Provincial Hospital were also moved out of the facility during the shaking, which was felt at Intensity in Mati.

In Davao City, some 250 kilometers to the southwest of the epicenter, one man was reportedly hurt after jumping from a scaffolding of a shopping center while several buildings, including a Jesuit-run university sustained minor structural damage.

A small fire also broke out but was quickly put out in one of the malls in downtown Davao immediately after the temblor.

The area east of Davao Oriental facing Davao Gulf and the Celebes Sea has been known to generate moderate to large quakes.

Last April, a magnitude 6.0 temblor occurred 43 kilometers east-southeast of Tarragona town as a section of the Philippine Fault moved.

It did not cause damage or injuries.

The most powerful before Saturday’s event was a magnitude 6.5, which hit Davao Oriental and nearby provinces on Sept. 24, 2016.

The Philippine Institute of Volcanology and Seismology (Phivolcs) said the area has also triggered great quakes in the past, including the magnitude 8.3 quake on April 14, 1924 that spawned a tsunami.

On Dec. 2. 1972, a magnitude 8.0 temblor also struck Mati and nearby areas but did little damage and caused a small tsunami, as its depth of focus was at 60 kilometers below the earth’s surface. /atm