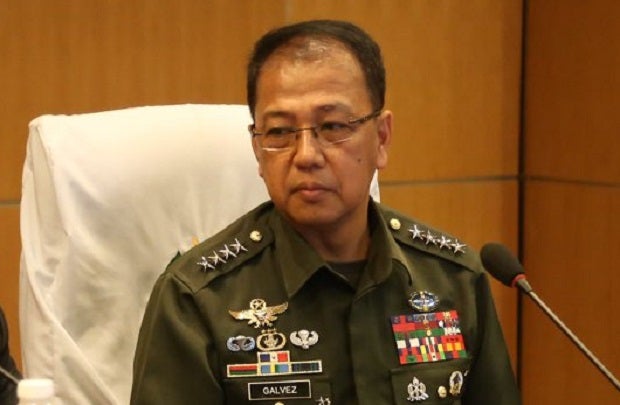 Armed Forces of the Philippines chief Gen. Carlito Galvez Jr. on Sunday warned government troops not to involve themselves in partisan politics following the nullification of the amnesty granted to Sen. Antonio Trillanes IV.

Speaking for the first time after joining President Rodrigo Duterte’s official visits to Israel and Jordan, the AFP chief reminded troops to remain faithful to the Constitution, else they would be dealt with accordingly.

“I am nonetheless reminding every soldier, airman, sailor, and marine not to meddle or take part in partisan politics. Our loyalty is to the Constitution. I command the troops to adhere to the rule of law and always obey the Chain of Command,” he said in a statement.

“Violation of these instructions will be dealt with severely and personnel who will get involved will be immediately relieve from their post and investigated,” he added.

The AFP chief also warned persons and groups “sowing intrigues and discord among its officers and enlisted personnel” amid speculations that there were “rumblings” in the military.

“Let me belie claims by some quarters of divisiveness or rumblings in the AFP. I assure our people that, as in many times in the past, the AFP will be one and undivided as an organization,” Galvez said.

“While I am aware that the troops have individual views on many issues, those merely hallmark an intelligent and matured organization like the AFP. But we always put the interest of the organization and the nation above our own,” he added.

He also reiterated the military’s earlier statement that it would yield to the Supreme Court on Trillanes’ petition questioning the proclamation that voided his amnesty.

According to Proclamation No. 572, signed Aug. 31, Trillanes allegedly failed to file an application for amnesty and express admission of guilt for his involvement in two failed mutinies in 2003 and 2007 to protest the alleged corruption during the presidency of Gloria Macapagal- Arroyo. It also directs the police and military to arrest the senator.

It also cites a military certification saying that there was “no available copy” of the senator’s amnesty application from the records of the Deputy Chief of Staff for Personnel, J1.

Because Trillanes supposedly failed to comply with the requirements for amnesty application, he will be tried to general court martial (GCM) and he will returned to military custody.

“When the GCM resumes, it shall proceed from where it stopped in its proceedings when Presidential Proclamation 75 was signed. The proceedings, however, will be held in abeyance until the SC has ruled on the merits of PP572,” Galvez said. /atm