Martial law not effective in combating terrorism in Mindanao — US Dept. of State official 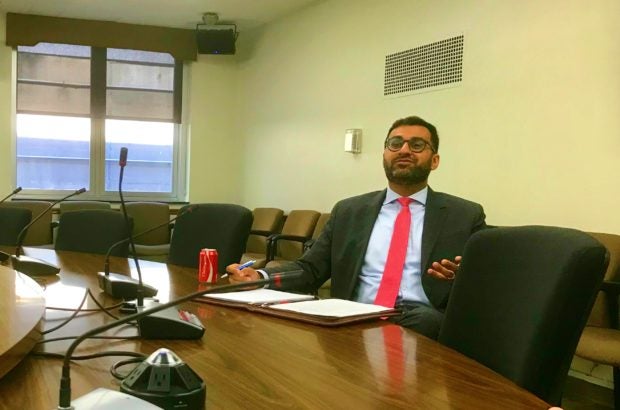 WASHINGTON DC— The imposition of martial law may be making places like Mindanao in the Philippines more vulnerable to terrorism and creating safe havens for extremists, a US Department of State official told visiting journalists here on Wednesday.

Irfan Saeed, director of the Office of Countering Violent Extremism under the State Department’s Bureau of Counterterrorism and Countering Violent Terrorism, said a community approach, rather than a military approach, might be a better tool at a time when Islamic State fighters were turning to Southeast Asia as a refuge for their activities.

Asked by the Inquirer if martial law was effective in combating terrorism in Mindanao, he said: “No. That is the short answer.”

“The response to terrorism and our efforts in countering violent extremism cannot be an excuse for an overly aggressive law enforcement approach,” he said during a briefing for the 2018 East-West Center’s Seminar for Senior Journalists.

“We’ve learned very clearly that this suppression of basic human rights, of civil liberties of the things that are required of countries under the Universal Declaration of Human Rights or the International Covenant on Civil and Political Rights, if you violate those basic human rights and liberties, you’re actually bringing a greater ability to recruit people to violent extremism,” Saeed said.

“We have seen the suppression of basic human rights as a potential driver of terrorism,” he added.

He said the Philippines, especially Mindanao, was at a pivotal point considering the risks it faced from ISIS recruits.

“The Philippines is a very important place… as we start to look at the next iteration of ISIS and terrorist spiders,” he said.

Saeed said the more appropriate approach would be to make communities more aware of their responsibility to deny terrorists safe havens, especially in areas with no military response, such as Southeast Asia, Pakistan, and the Balkans.

“Because when you have a government only responsible for denying those safe havens, you have the possibility of an overly aggressive approach, and that, as we know, does not work,” he said.

Mindanao has been under martial law since mid-2017 in the aftermath of the May 2017 siege of Marawi City by militants.

Congress later approved two extensions of military rule and the suspension of the writ of the privilege of habeas corpus in the region.

However, violent attacks still happened in Mindanao in recent months despite the declaration of martial law.

In late August, terrorists set off homemade bombs that killed at least two persons and injured dozens of others in Isulan town, Sultan Kudarat. ISIS claimed responsibility for the attack, according to a US intelligence group.

On July 31, at least 10 people were killed and several others wounded when a van exploded outside a checkpoint in the Island city of Lamitan in Basilan.

Instead of returning to their home countries upon radicalization, “we’re starting to see people return to third countries where they feel like they can have safe havens,” he said.

“And unfortunately, places across Southeast Asia, but in particular the Philippines— we know the attack in Marawi — this is where we are starting to have some very clear concerns about safe havens,” Saeed said.

The seminar organized by the Honolulu-based East-West Center is an annual fellowship for journalists in the US and countries with substantial Muslim populations, who go on a three-week tour of US, Asia, and Africa to study the role of religion in the public sphere.   /vvp