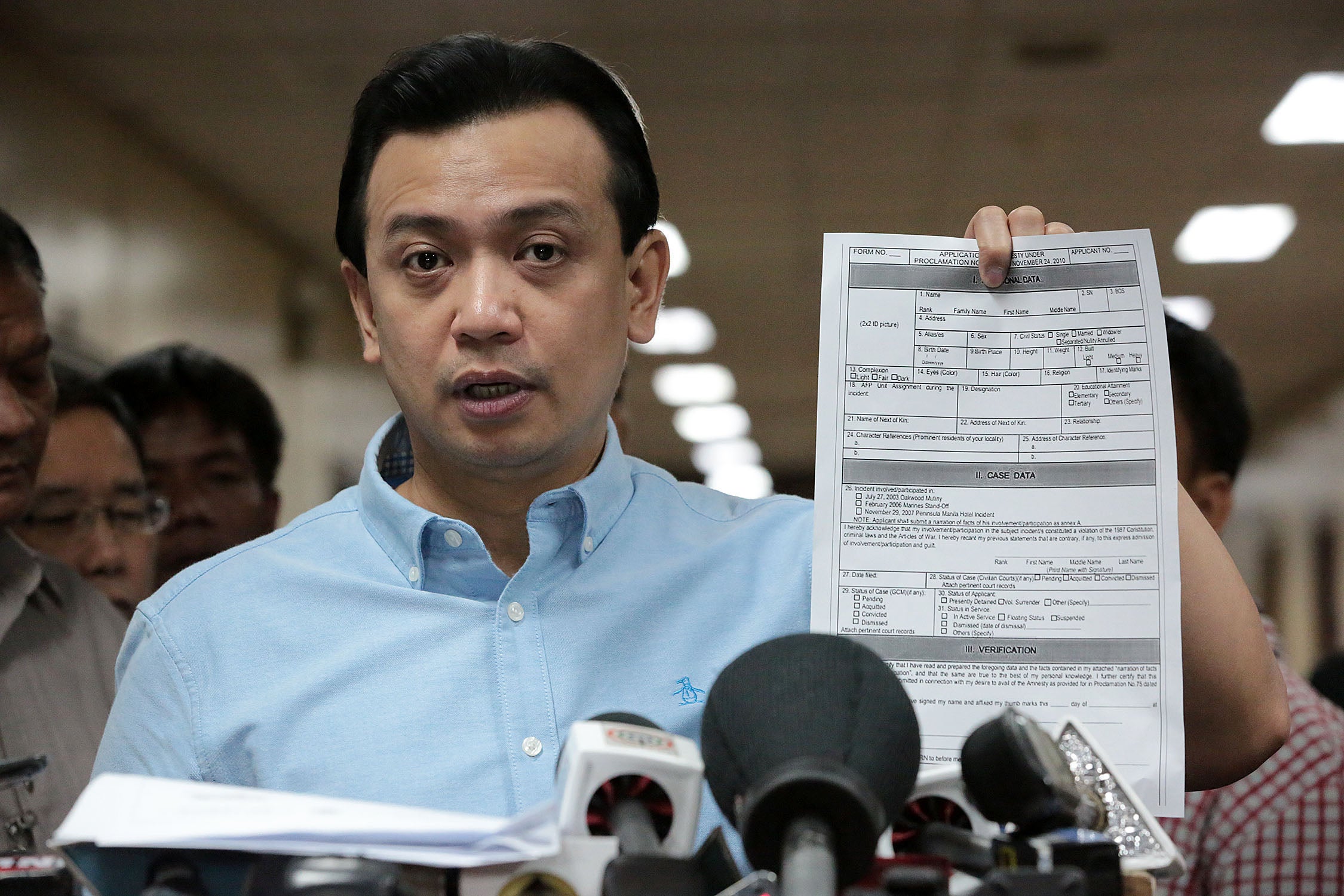 Senator Antonio Trillanes IV shows an application form for amnesty at a news briefing outside the senator’s office at the Senate in Pasay City on Thursday, September 6, 2018. His lawyers are poised to file at the Supreme Court a temporary restraining order for his arrest. INQUIRER PHOTO / GRIG C. MONTEGRANDE

Trillanes, holed up in the Senate to avoid arrest, told the high court through a petition filed for him by lawyer Reynaldo Robles that the President’s Proclamation No. 572 voiding his 2011 amnesty as a former rebel military officer and ordering his arrest was unconstitutional.

The Department of Justice (DOJ) has said that the President voided Trillanes’ amnesty because the senator did not file a proper application and admit guilt for his role in coup attempts against President Gloria Macapagal-Arroyo in 2003, 2006 and 2007.

Trillanes on Tuesday showed the media documents to prove that he applied for amnesty in January 2011 and that it was granted by then President Benigno Aquino III and concurred in by Congress.

Aquino on Wednesday confirmed that he granted amnesty to Trillanes and said he was willing to testify to the validity of the grant if called as a witness.

In his petition, Trillanes, a fierce critic of President Duterte, told the Supreme Court that the President’s order was “nothing but a cheap political stunt designed to harass, prejudice and punish a political opponent of the administration.”

He asked the high court to issue a temporary injunction against the presidential proclamation, saying the order to arrest him was “clearly illegal” since the police did not have a warrant.

Trillanes also asked the high court to stop the scrapping of his amnesty, saying there was “utterly no basis” for President Duterte’s move because he complied with all the requirements.

He said it was “impossible” that he did not admit guilt, pointing out that the application form required the applicant to “recant previous statements that are contrary to this expressed admission of involvement/participation and guilt.”

He said he was given a certificate of amnesty in 2011 by then Defense Secretary Voltaire Gazmin and on the basis of the grant, the courts dismissed the cases that had been brought against him.

Trillanes submitted copies of court orders dismissing the cases against him based on the amnesty.

“It can reasonably and legally be presumed that [the] courts also reviewed and passed upon the legality and validity of the amnesty proclamation,” he said.

The move to revive the cases against him, he said, “violates the constitutional guarantee against double jeopardy,” or being tried again for the same crime.

Trillanes charged that President Duterte’s order violated the Constitution’s equal protection clause, as he was “singled out [and] specifically targeted” among the rebel officers and soldiers who were granted amnesty in 2011.

Asked for comment, Guevarra said Trillanes should just try to convince the Supreme Court that the cases against him had been dismissed.

He said the case at the Makati Regional Trial Court Branch 148 “has in fact been revived,” as the court had set a hearing on the DOJ’s petition for a warrant of arrest.

Acting Prosecutor General Richard Fadullon, who prosecuted the coup d’état case against Trillanes, said the senator’s argument had no leg to stand on.

“The grant of amnesty as far as Trillanes is concerned has been declared void [from the start],” he said.

‘No factual or legal basis’

President Duterte’s order to arrest Trillanes had “no factual or legal basis,” according to Jose Manuel Diokno, head of the Free Legal Assistance Group, the largest organization of human rights lawyers in the Philippines.

Trillanes expressed a “general admission of guilt” when he applied for amnesty, “although this was not even required,” Diokno told a forum organized by the People’s Campaign Against Tyranny at Holy Angel University in Angeles City, Pampanga province.

“Once amnesty is granted and concurred in by Congress, it cannot be revoked,” Diokno said.

Trillanes, he said, is also shielded by jurisprudence against double jeopardy.

The opposition in the House of Representatives on Wednesday introduced a resolution expressing the “collective sentiment” of the House by denouncing President Duterte’s cancellation of Trillanes’ amnesty.

“The revocation of Senator Trillanes’ amnesty grant is unwarranted and unlawful because an amnesty is final, absolute and irrevocable,” said the lawmakers, led by Albay Rep. Edcel Lagman.

In the Senate, Trillanes told reporters that some military officers were “conflicted” about and “extremely bothered” by President Duterte’s order.

“At some point, some people will make a moral decision,” he added.

“They know this is just politics. They know that this will put the AFP in a bind and they will be forced to be complicit,” he said. —WITH REPORTS FROM LEILA B. SALAVERRIA, JEROME ANING, TONETTE OREJAS AND AP