After making his reputation as a rebel, Sen. Antonio Trillanes IV is gearing up for a battle in the courts to stop President Rodrigo Duterte from jailing him.

The President, who swore revenge after Trillanes linked him to corruption and one of his sons to illegal drugs and smuggling, and supported petitions to the International Criminal Court seeking his indictment over thousands of alleged extrajudicial killings in his brutal war on drugs, voided the amnesty given to the senator as a military rebel in 2011.

Through Presidential Proclamation No. 572, which he signed on Aug. 31, the President said he voided Trillanes’ amnesty because the former Philippine Navy lieutenant fell short of the minimum requirements, including admitting his guilt.

The President ordered the police to arrest Trillanes and the military to resume court-martial proceedings against him that were halted after he was granted amnesty.

Holed up in the Senate to avoid arrest, Trillanes said he would challenge the application of the Department of Justice (DOJ) for a warrant to arrest him for rebellion and coup d’état, the charges brought against him for taking part in attempts to overthrow President Gloria Macapagal-Arroyo in 2003, 2006 and 2007.

He said he would also challenge in the Supreme Court the President’s proclamation, which he described as “illegal.”

“To me, this goes beyond political lines because the presidential declaration should alarm the justices of the Supreme Court. It contains [Mr.] Duterte’s exercise of executive, legislative and judicial powers,” Trillanes said. 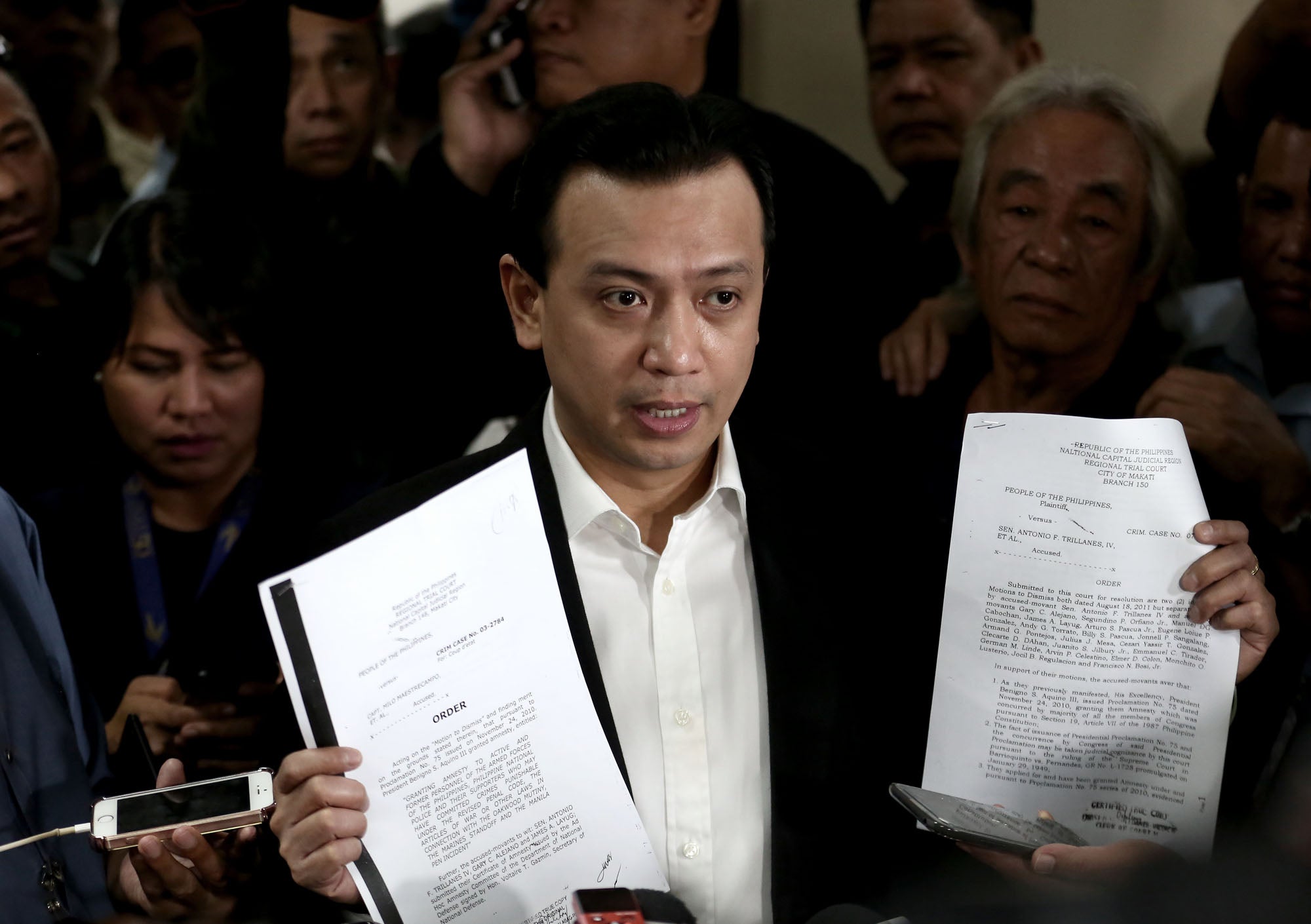 COURT RULINGS Sen. Antonio Trillanes IV shows copies of separate rulings issued by the Makati Regional Trial Court in 2011 dismissing the coup and rebellion charges lodged against him by the Arroyo administration, after he was granted amnesty by then President Benigno Aquino III. —RICHARD A. REYES

He said the rebellion and coup d’état charges against him were dismissed in September 2011. He showed reporters court documents to prove that the cases had been dismissed.

Trillanes won the first round against the DOJ on Wednesday after Judge Andres Soriano of the Makati Regional Trial Court (RTC) Branch 148 refused to grant the department’s ex parte motion for a warrant of arrest and hold departure order for the senator without a hearing.

In his order dated Sept. 4, Soriano gave Trillanes five days to comment on the government’s motion and set a hearing for Sept. 13

Soriano said the “very sensitive case” took on “very serious legal issues” so that he had to be “careful.”

Soriano noted that the coup charge against Trillanes was dismissed on Sept. 21, 2011, by then acting Judge Maria Rita Sarabia, “pursuant to the grant of amnesty” to him.

He said the separate rebellion charge against Trillanes was dismissed by Judge Elmo Alameda of the Makati RTC Branch 150 on Sept. 7, 2011, also because he had been granted amnesty.

The DOJ did not bring a motion for a warrant of arrest and hold departure order for Trillanes in Branch 150.

Soriano said his court may have jurisdiction to hear the factual aspect of the controversy, “that is whether Trillanes fulfilled the requirements for his application [for] amnesty.”

Guevarra said Trillanes could not be arrested without a warrant.

“The police will have to wait for the warrant,” he said.

In the Senate, Trillanes said  he could not be court-martialed because he was no longer a military officer and that he became a civilian after he successfully ran for the Senate in 2007.

Trillanes presented documents that showed he resigned from the military on Feb. 6, 2007, and a copy of a general order dated May 3, 2007, on the effectivity of his resignation.

He also showed a service clearance dated Aug. 28, 2007, stating that he had no money and property accountabilities and could leave the service.

Trillanes said he resigned from the military when he filed his certificate of candidacy for the Senate.

He said the documents showed that the Department of National Defense had no jurisdiction over him. —With a report from Dexter Cabalza