Boracay can handle only 55,000 people a day, says DILG 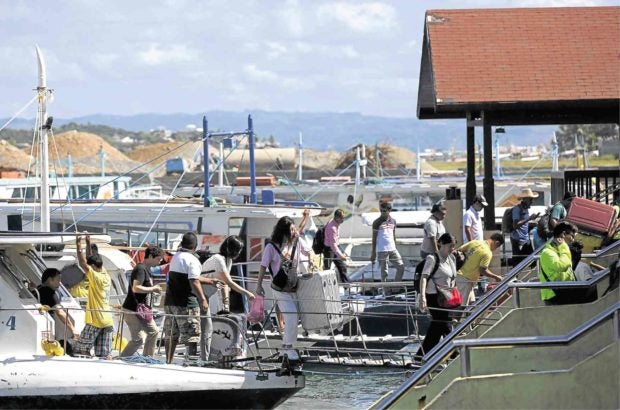 BORACAY HOLIDAY In this photo taken in April, the Caticlan jetty port in Malay town, Aklan, is busy as boatloads of tourists from Boracay Island arrive. —LYN RILLON

Before its shutdown in April, Boracay Island, comprising of only three villages, had been hosting an average of 15,000 people daily beyond its ideal carrying capacity of 55,000, an official of the Department of the Interior and Local Government (DILG) said on Monday.

Año’s figures—19,000 for tourists and 36,000 for residents and workers—were based on the study conducted by the Department of Environment and Natural Resources (DENR)-Ecosystems Research and Development Bureau and the University of the Philippines Los Baños.

The initial findings were presented two weeks ago to the interagency task force overseeing the island’s rehabilitation.

The study had found that while Boracay’s carrying capacity had been pegged at only 55,000 at any given day, “there was an average of 70,000 people on the island per day, meaning there was a 15,000 overcapacity,” Densing said.

In February, President Rodrigo Duterte described Boracay’s waters as a “cesspool” due to environmental degradation on the island.

The government, on April 26, ordered the island closed to tourists for six months as a massive cleanup was underway.

The island is expected to be “reopened” to tourists next month.

In an earlier statement, the DENR blamed the breaching of the island’s carrying capacity for the “generation of too much waste and the deterioration of water quality.”

“The results of the study will be used by the Boracay Interagency Task Force in formulating policies that will ensure that the rehabilitation efforts of the island can be sustained,” it said.

Densing clarified, however, that these figures were still a “draft” of the results of the study, which was still being finalized and had yet to be officially presented by the DENR.

“LaBoracay,” the Labor Day and long weekend beach parties held in Boracay, once caused the influx of 67,000 tourists in a day, Densing said.

This was on top of the 32,500 island residents estimated by the Philippine Statistics Authority, he said.

That meant the island, during LaBoracay parties, might have hosted nearly 100,000 people a day, or around double its carrying capacity, he added.

In Aklan province, Nenette Aguirre-Graf, president of the business group Boracay Foundation Inc., said the determination of and planning on the new carrying capacity of the island should involve residents and local business operators.

“This needs a thorough planning involving native residents and business operators of the island because we will also be involved in the implementation,” Graf said.

She said they agreed that holding of “LaBoracay” parties should be stopped as these bring in at least 15,000 tourists more daily.

Graf said a major step to decongest the island was to provide housing for workers on Malay mainland.

Government agencies, she said, should also review the entry of cruise ships in Boracay as these ships carry between 2,000 and 4,000 tourists to the island. —JAYMEE T. GAMIL AND NESTOR P. BURGOS JR.