US joins outcry against Myanmar's jailing of 2 reporters | Inquirer News

US joins outcry against Myanmar’s jailing of 2 reporters 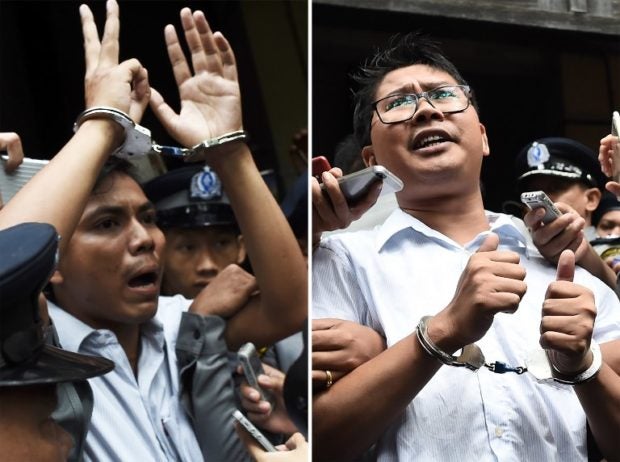 This combo shows journalists Kyaw Soe Oo (left) and Wa Lone (right) being escorted by police after their sentencing by a court to jail in Yangon on September 3, 2018. Two Reuters journalists were jailed for seven years for breaching Myanmar’s official secrets act during their reporting of the Rohingya crisis, a judge said, a case that has drawn outrage as an attack on media freedom. AFP

WASHINGTON, United States – The United States on Monday condemned the jailing in Myanmar of two Reuters journalists who had reported on a massacre of Rohingya Muslims in that country, calling it “deeply troubling” and urging the men’s immediate release.

Wa Lone, 32, and Kyaw Soe Oo, 28, were sentenced Monday to seven years in jail on charges of violating the Official Secrets Act, a draconian British colonial-era law which carries a maximum sentence of 14 years.

The case has drawn international condemnation as an attempt by Myanmar authorities to muzzle reporting on last year’s crackdown by security forces on the Rohingya minority.

A statement from the US embassy in Yangon said the case raises “serious concerns about rule of law and judicial independence in Myanmar, and the reporters’ conviction is a major setback to the government of Myanmar’s stated goal of expanding democratic freedoms.”

The US State Department did not issue a separate statement, referring instead to the embassy comment.

The United Nations, the European Union and, separately, EU members Britain and France have condemned the verdict and called for the release of the men, jailed since December.

Canada’s special envoy to Myanmar, Bob Rae, denounced the sentence as “a parody of justice.”

The reporters have denied the charges, insisting they were set up while exposing the extrajudicial killing of 10 Rohingya Muslims in Inn Din village last September.

They told the court they had been invited to dinner by police in Yangon, who handed them documents. As they left the restaurant, the two men were detained for possessing classified material.

The group Reporters Without Borders denounced the “sham trial,” which it said had dealt “a terrible blow to press freedom in Myanmar.” It called for the men’s immediate release. /cbb