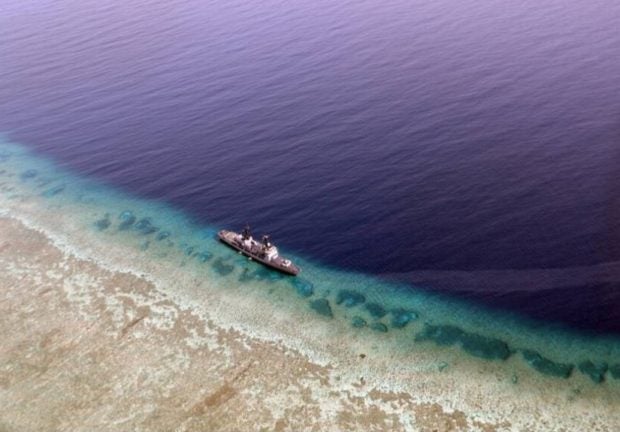 This photo from the Navy taken on August 29, 2018, shows the BRP Gregorio del Pilar (FF-15) aground on Hasa-Hasa Shoal. CONTRIBUTED PHOTO

The warship was pulled out from the shoal at 11:54 p.m., a military official privy to the situation but was not privy to speak to the press said early Tuesday.

Salvage operations began at around 2 p.m. on Monday until it was finally refloated.

Two tugboats from a privately-owned firm, M/T Trabahador and M/T Vigilant, will tow the ship to Subic.

BRP del Pilar ran aground in the vicinity of Hasa Hasa Shoal, about 60 nautical miles from Rizal, Palawan, while on routine patrol Wednesday night.

It was still unclear how and why the ship ran aground.

No one was hurt from the incident but the damage was largely to the starboard propeller and slightly to the port propeller.

The frigate is one of the three former US Coast Guard cutters acquired by the Philippine military during the previous administration. It is the lead ship of her class.

Conservative estimates say it will take about 48 hours to get the warship to Subic where it can be anchored and the damage properly assessed.

As a result of the grounding incident, the military has formed Task Force Goyong, headed by Commodore Rommel Galang, commander of the Naval Forces West. He was tasked to oversee the retrieval operations. /asu