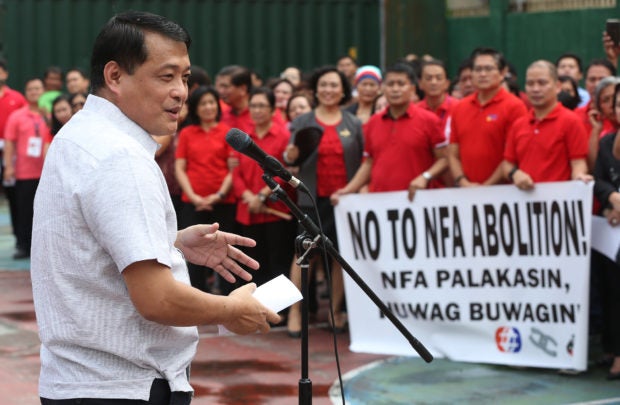 National Food Authority (NFA) Administrator Jason Aquino on Monday admitted that the agency used nearly all of P7 billion in state subsidy for the purchase of palay (unhusked rice) from farmers this year to service its debts without approval from the agency’s policy-making body.

Members of the House of Representatives took turns in grilling Aquino, a former Army colonel, over his questionable decision, which the lawmakers believed sparked the recent shortage of NFA rice and escalating prices of the staple.

At the hearing of the House appropriations committee chaired by Davao City Rep. Karlo Nograles, the NFA chief confirmed a report of the Commission on Audit (COA) that funds earmarked for the agency’s “buffer stocking program” for 2017 and 2018 were spent to settle its loans with Land Bank of the Philippines and Development Bank of the Philippines.

For this year alone, Aquino said the NFA had used P6.1 billion to pay off a portion of its debts, which started to balloon during the Arroyo administration.

Nograles asked Aquino if the NFA had sought the authority of its governing body, the NFA Council, before it funneled the funds for a different purpose.

“Don’t you think it was just proper that before you diverted and used the funds for another purpose, you asked first for permission from the NFA Council?” the Davao lawmaker said.

Speaking calmly, Aquino disclosed that the NFA did not seek permission from the council, a body composed of 11 state agencies, since it had been the practice of previous NFA officials.

He, however, insisted that members of the council were “updated” on the financial state of the NFA.

His admission may open him up for prosecution as Nograles earlier argued that diverting public funds that Congress had allocated for a specific purpose was tantamount to technical malversation.

“So it’s even bigger than what I was previously told,” said a visibly surprised Nograles, who earlier said a senior NFA official had informed him that the agency used P5 billion of the P7 billion allocated for the procurement of local rice to pay off its debts.

“Instead of purchasing rice, you spent the subsidy to pay your loans. If only you used the money to ensure that we have buffer stocks, then we wouldn’t have this problem, don’t you think?” he asked Aquino.

“We gave you this money as a subsidy for you to help our local farmers. That’s the mandate of the NFA. That’s the reason of the subsidy,” he added.

To which the NFA chief replied, “The problem with the subsidy is that it’s really not enough for the purchase of (local) rice and for rice importation.”

“So what we do is to advance the payment (sourced from the loans) and then pay for the loans when the subsidy is released. In fact, the subsidy for 2018 is too small as we spent about P6 billion for the importation of 250,000 metric tons of rice,” he said.

Aquino said the NFA had long been arguing that the prevailing average farm gate price of P17 per kilogram of palay would make it difficult for the agency to ensure a steady supply of affordable rice.

He noted that palay would cost double since the NFA still had to process it before the grain could be made available for distribution and consumption. “We have no other option, but to resort to importation.”

But Bayan Muna Rep. Carlos Zarate argued that it was the decision of the NFA itself not to raise the farm gate price of palay, which has contributed to the depletion of the rice stocks of the agency.