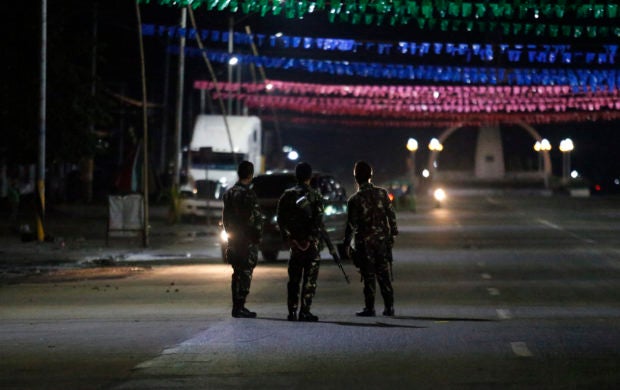 Troops secure the Isulan town proper on September 2, 2018 after a homemade bomb exploded in the southern Philippine town of Isulan in Sultan Kudarat. PHOTO by Jeoffrey Maitem / Inquirer Mindanao

“I just received information from the regional director of Soccsksargen, another victim died 10:15 this morning,” Durana said in a press conference.

Durana identified the second fatality as Marialyn Lupa, a 15-year-old girl who was also a relative of the first victim of the bombing incident.

The PNP then extended its condolences to the Lupa family as they condemned the attacks.

“We extend our sympathies to the Lupa family and strongly condemn this senseless act of terror done for whatever motive the perpetrators may have,” Durana said.

Durana also assured the residents on the island of Mindanao that the PNP has been closely coordinating with the police units in the province.

He said that PNP Chief Oscar Albayalde already directed the local authorities in Sultan Kudarat to intensify its checkpoints and strengthen its law enforcement operations.

Durana also advised the public to remain steadfast amidst the series of attacks in the province.

“We appeal to the public to immediately resume their normal activities and not be disrupted by this incident to deliver a strong message that the people of Sultan Kudarat will not be cowed,” Durana said.

“All hands are on deck. We want to resolve this as soon as possible,” Durana added. /je