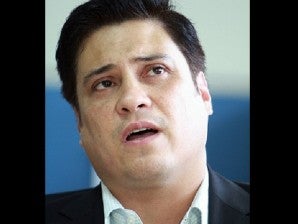 Former Senator Juan Miguel Zubiri on Tuesday made an unceremonious return to the Senate after being dragged into an alleged “special operations” that manipulated the results of the 2007 senatorial elections.

Zubiri, who resigned in August, said he rushed to the Senate after his name was mentioned in the testimony of witness Ahmad Mamucao, who admitted to taking part in the supposed operation facilitated by an aide of then President Gloria Macapagal-Arroyo.

Mamucao said he had moved blank ballots and other election materials from a boxing gym owned by Zubiri in Bukidnon province to a house owned by engineer Norie Unas in Cotabato City for the postelection “operation.”

Mamucao, a consultant of  then Maguindanao Governor Andal Ampatuan Sr., said he had been assisted by a certain Rudy and Alex, who introduced himself as a “cousin” of Zubiri.

“That is a complete, complete, utter lie!” Zubiri told his former colleagues. “I have no participation whatsoever in any electoral fraud in the past or in the present. I have no knowledge (of) or tolerance for electoral fraud.”

Zubiri added: “I have no cousin named Alex or Rudy whether (in the) first, second, third or fourth degree of affinity and I can give you (a copy of) my family tree.”

He also cried foul over Mamucao’s information that he was willing to spend P10 million for the supposed postelection operations.

“After the election, I had no more money! We were nearly broke after the election. My family knows that. My friends know that. How could I have spent P10 million for post operation?” he protested.

It was the first time that Zubiri stepped into the Senate, three months after he resigned in the face of fresh allegations of massive cheating during the 2007 senatorial elections.

The Senate Electoral Tribunal later ruled that Aquilino “Koko” Pimentel III was the rightful winner of the 12th and final slot in the 2007 Senate elections.

Pimentel on Tuesday came face-to-face with Zubiri while presiding over the Senate hearing on the alleged election fraud.

Pimentel, who waited four years to be finally proclaimed winner, introduced Zubiri as a “former congressman,” apparently ignoring that he had also served as a senator.

But Zubiri said he was not offended.

“That’s all right. For me, it’s water under the bridge. We are both Mindanaoans. We should support each other in the next election,” he told reporters after the hearing.

Zubiri said he volunteered to show up in the hearing after he saw on TV that he was being dragged by Mamucao into the controversy. He vehemently denied the allegations while sitting close to the witness.

Pimentel told Zubiri: “Thank you for coming over because I was really intending to invite you to the next hearing. It’s good that you have this proactive stance.”

Zubiri said: “To my honorable former colleagues, friends, it’s good to see everybody again. I thought I’d be coming to the Senate at a later time rather than earlier.”

He alleged that he was the victim of a “demolition job” owing to his opposition to the postponement of the elections in the Autonomous Region in Muslim Mindanao, a major policy initiative of the Aquino administration.

Zubiri said the supposed smear campaign came when the Social Weather Stations was to release the results of a recent survey purportedly showing that he was in the “Top 8” of prospective senators in the 2013 elections.

He said the results showed that none among the possible winners were identified with the Aquino administration.

“Is it because in the survey that is supposed to come out that there are no administration candidates faring well? So are they trying to destroy us one by one so that they would be ones to get in?” Zubiri said.