Duterte in word war with Osmeña over Cebu’s problem with drugs, criminality 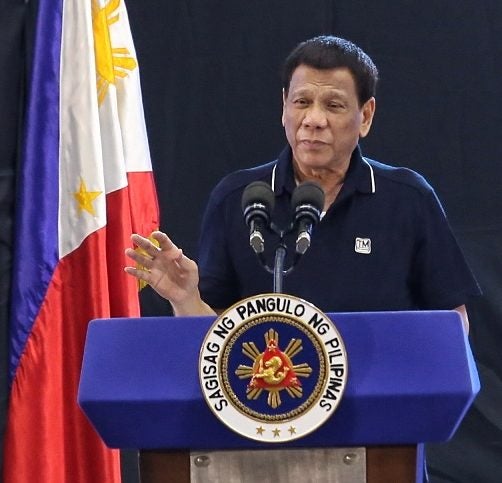 In his sixth and latest visit to Cebu to grace the 49th Mandaue City Charter Day Celebration on Thursday, the President criticized the mayor and called him “hubris” or someone with exaggerated self-pride.

The rift started when Osmeña allegedly accused the President as a drug protector and reportedly asked him not to dip his hands in Cebu City’s affairs and efforts in the war against illegal drugs.

(Hoy Tomas! This is not the time of the Spanish colonization. Who do you think you are? You speak so highly of yourself. You even said that I’m a protector of shabu)

President Duterte talked about the mayor for more than five minutes of his speech that lasted for one hour and 13 minutes.

Just minutes after the President finished his speech at the Mandaue Cultural and Sports Complex, Osmeña immediately aired his side on the President’s statements, saying he was just pointing out a problem.

“The President is entitled to say whatever he wants. As a lawyer, I am sure that he knows there are two sides to any story, and not just what (Presidential Assistant for the Visayas Michael) Dino and PRO-7 (Police Regional Office 7) are telling him,” the mayor said in a post on his Facebook page.

He explained that he was just pointing out the problem on illegal drugs and criminality in Cebu, which he said the police refused to admit, insisting instead that Cebu is still safe.

“If I have to be the bad guy for mentioning that there is a problem, so be it. No problem, this is what I signed up for,” Osmeña said.

“Regardless, I will continue to do my job. I was elected by the Cebuanos, and it is them I am obligated to. I will continue to act in the interest of my people, especially those who have no one else to stand up for them,” he added.

“Kung manulti murag kinsa. ‘Ayaw hilabti ang Cebu kay kaya namo ni,’ (You talk so highly. ‘Don’t meddle with Cebu because we can take care of it’) who are you to say that? As if you own Cebu? By what right? Just because you were the former President’s son or grandson?” he said, referring to the mayor.

“And you think kung manulti ka, mura kag si kinsa. Put*ng-*na, tamparuson gyud tika (You talk as if you’re somebody. I will really slap you),” he added.

The President arrived in Mandaue City at around 6:30 p.m. to attend the city’s charter day celebration where he was the keynote speaker.

He was welcomed by Mandaue City Mayor Luigi Quisumbing and Vice Mayor Carlo Fortuna. Presidential Assistant for the Visayas Michael Dino was among the President’s entourage.

Prior to delivering his speech, the President was briefed by National Housing Authority (NHA) General Manager Marcelino Escalada Jr. about the NHA’s partnership with the local government unit of Mandaue City for a low-rise housing project in Barangay Looc.

President Duterte also reiterated his warning to law enforcers and government officials not to be engaged in the illegal drug trade and in corruption.

In his speech, he said that he is trying to build a city and vowed that he will kill anyone who will destroy what he is building.

“Kung ikaw militar or naa kas gobyerno unya mag-apil apil ka og gamit, timan-i, ikaw jud akong unahon(If you’re in the military or in government and you are involved or you’re a user, remember, I will go after you first),” he said.

Before ending his speech, the President also handed out a copy of the book ‘Altar of Secrets,’ which was received by Mandaue City Councilor Malcolm Sanchez.

The book, authored by the late veteran journalist Aries Rufo and published in 2013, exposes the alleged illegal abuses committed by Filipino bishops and priests.

The President also dedicated a portion of his speech in criticizing the Roman Catholic Church, reiterating his earlier statements that while he has a God, it’s not the same as the Catholic Church’s god.

The celebration was attended by Mandaue City officials, City Hall department heads and employees, law enforcement officers of the city, and other guests.

Mandaue City Mayor Luigi Quisumbing, for his part, made a public commitment in front of the President that the city government will continue to support the Duterte administration’s war against drugs.

“Yesterday (Wednesday) during our SOCA (State of the City Address), we vowed to support the administration in restoring peace and order in our beloved country and wipe out the menace of illegal drugs and also pursue efficient social services. I pledge to you that Mandaue City will do its part in your vision for a greater Philippines,” he said in his speech.

He also thanked the President for gracing the city government’s celebration. /ee