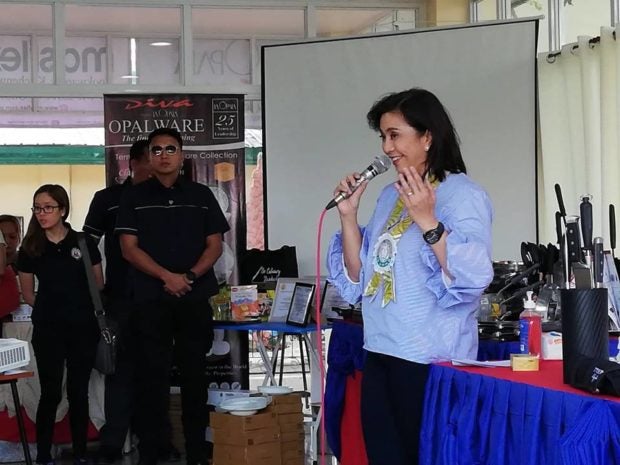 Vice President Leni Robredo was in Bohol on Thursday for the turnover of utensils and equipment at Lourdes High School in Panglao, Bohol. Leo Udtohan/Inquirer Visayas

That was the reaction of Vice President Leni Robredo of the appointment of Associate Justice Teresita Leonardo-De Castro as chief justice of the Supreme Court.

(The appointment of Chief Justice De Castro was a done deal.)

De Castro took her oath before the Supreme Court en banc at 10:30 a.m. on Tuesday.

She is the first female Philippine chief justice, after ousted Maria Lourdes Sereno was found to be “de facto” officer who is ineligible to hold the same position “for lack of a constitutional qualification.”

De Castro, who replaced Sereno, has a term for only for two months.

Robredo wished De Castro would spend her time to fix the judiciary after it so far suffered the gravest consequences.

(We just wish that the two months of her stay in office will be spent in strengthening the institution, that I think, went through complications because of the quo warranto case.)

The Supreme Court, according to Robredo, needs to be fixed as it impacted the course of history.

(So many things need to be repaired. I hope her stay in office will be used to repair. I believe that a stable Supreme Court is very essential in a democracy. Whatever damage was caused because of what she went through, I hope will be fixed.)

Robredo was in Lourdes High School in Panglao town on Thursday for the turn-over of utensils and equipment to senior high school students.

Robredo has appealed for a higher budget for her office as she lamented that almost P100 million was slashed from her office’s allocation. She said it would affect their livelihood subsidies for poor families in the country.

The House appropriations panel approved on Wednesday the proposed P447.6-million budget of the Office of the Vice President (OVP) for 2019.

(Yesterday I defended the budget. We were deducted almost P100 million. A big thing for us because our budget is already small, then it would further be reduced. It will be difficult for us to sustain it. I mentioned this during yesterday’s hearing.)

She said the Senate appropriated a higher budget last year, but she was willing to work even if she had a limited budget.

She hoped they’d “reconsider the budget.