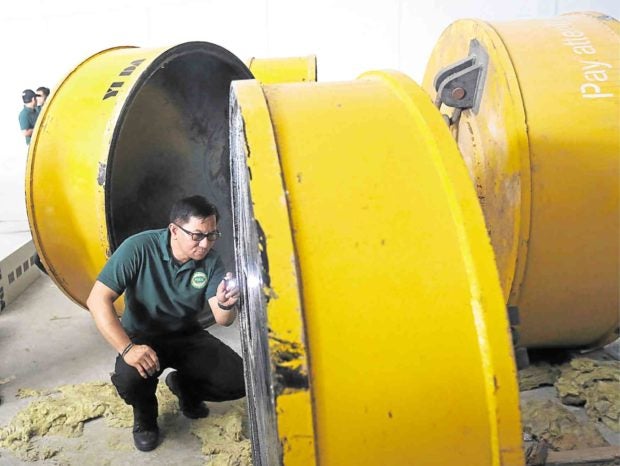 PDEA chief Aaron Aquino inspects one of four magnetic lifters that contained traces of “shabu” (crystal meth) already emptied by drug traders that smuggled about P6.8 billion of the illegal drug in a Cavite warehouse on Friday. Authorities found the massive steel devices with hollowed parts where the drugs were hidden inside a warehouse in General Mariano Alvarez town in a follow-up operation after seizing 500 kilograms of shabu worth P4.3 billion (below) inside two lifters at the international container port in Manila two days earlier. (Photo by EDWIN BACASMAS)

The Philippine Drug Enforcement Agency (PDEA) on Wednesday filed before the Department of Justice (DOJ) a criminal complaint against persons involved in the shipment of magnetic lifters, which were found containing P2.4-billion worth of illegal drugs.

The case stemmed from the seizure of 355 kilos of methamphetamine hydrochloride, also known as shabu, which were found inside two magnetic lifters at the Manila International Container Port (MICP).

The Bureau of Customs (BOC) has already filed before the DOJ criminal complaints against Vecaba Trading and its owner Vedasio Cabral Baraquel.

They are facing a case for violation of Section 1401 (Unlawful Importation) in relation to Section 118 (g) (Prohibited Importation), pursuant to Sections 4 and 5 of RA 9165.

The shipment from Malaysia was said to contain door frames, but upon inspection and 100-percent physical examination, authorities discovered that it contained two magnetic lifters containing 355 kg of “shabu” estimated to be worth about P2.4 billion.

The shipment, which arrived in the country on June 28, was deemed abandoned after the consignee failed to file an entry document within 30 days from the date of discharge.  /kga