In Ateneo, Filipino is not just for ‘Kuya Driver, Ate Yaya’ 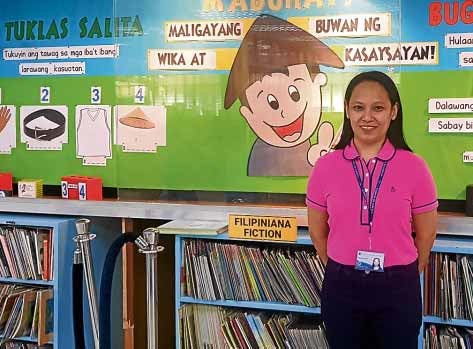 TEACHING FILIPINO Desiree Reyno, coordinator for Filipino at Ateneo de Manila Grade School and a teacher of Filipino, explains the challenge for most of the learners of the native tongue whose first language is English. —JODEE AGONCILLO

At Ateneo de Manila Grade School, a Jesuit Catholic school, a student cannot move to the next level without mastering Filipino, a challenge for most of the students whose first language is English.

“They have difficulty. There are times the students think of their answers in English and translate it directly into Filipino. Sometimes, they would ask help and ask for the Filipino counterpart of the English word,” said Desiree Reyno, the school’s Filipino coordinator who has been teaching Filipino for more than 20 years.

“It’s a painful truth that English has become the students’ first language. Well, not only here in Ateneo but also in other schools. Most of them [speak] English as [their] the first language. Their second language is Filipino. They make up for it in school, where they enrich their Filipino vocabulary. Ateneo students have good comprehension. They [only] have a hard time expressing it in Filipino,” she said.

“The Ateneo de Manila Grade School is a Filipino, Catholic, Jesuit basic preparatory school for boys. That means he is a Filipino and a Catholic—those are of equal weight,” she said.

“A child who is fluent in Filipino is ahead of average children. They can communicate with anyone in the country,” Reyno said.

In lower levels, the challenge is to make the students appreciate Filipino, she said.

In higher levels, the task is to make more technical and complicated concepts in Filipino understandable.

During the students’ earlier years in grade school, they are asked to express their thoughts freely and they are not graded, Reyno said.

“They can talk, even in broken Filipino. When they reach Grade 4 to 6, that’s the time they will be graded. During recitation, we ask them to speak. If they cannot speak in Filipino, we ask them what they want to say, they’ll switch codes, and then we tell them how to say it in Filipino, and have them repeat it. That way, they will not fear [to speak],” she said.

Rizal was an Atenean

Pointing to a painting of Rizal in a corner outside the department, Reyno said her students were proud that the national hero, who emphasized the value of using the Filipino language, was an Atenean.

Among the literary works the students are expected to read and master is “Sa Aking Mga Kababata” (To My Childhood Friends).

In Ateneo, four subjects use Filipino as a medium: sining at paggawa (arts and crafts), physical education, araling panlipunan (social studies) and Filipino. The first three subjects are more lenient in having students speak straight and grammatical Filipino.

The class sections are in Filipino as well: names of trees, mountains, national places.

Some of the signs on the campus are written in Filipino.

In general, students who score low in Filipino are offered remedial classes.

“Last year, I can say all grade school students were prepared for high school in terms of proficiency in Filipino and could now express their opinion in the language,” Reyno said.

In a reflection online, Reyno recalled one instance when a student approached her and asked why he needed to learn Filipino when he would become a CEO in the future.

“You will need Filipino to communicate better both with the workers and experts in a company,” she replied, and the student was satisfied.

Reyno said there were parents who admitted their sons could not speak Filipino. “But since they chose Ateneo they know Filipino is very important,” she said.

“The role of parents in practicing Filipino is very helpful. This is a partnership. We hope the things the students learn in school will also be applied at home. Filipino is not just for Kuya Driver, Ate Yaya. It’s also for Mommy and Daddy and Lola,” Reyno said.

“There are several students who are proficient in Filipino, although students in public schools generally do better. In Grade 1, we already tell the parents that we put a prime on the Filipino language. It’s not just excellence in English, math, but excellence as a whole,” she said.

These observations were echoed by Aura Abiera, Filipino professor and former Filipino department chair of the University of the Philippines-Diliman, who has two sons at Ateneo de Manila High School.

“Ateneo as an institution values the Filipino language,” Abiera said, noting that most, if not all, of the school’s ceremonies, are in Filipino.

“My sons are fluent in Filipino and in English. They will talk to each other in English, but when I talk to them, they speak in Filipino,” Abiera said.

Abiera said she used Filipino in writing letters, at work and excuse letters for her children. There should be a conscious effort to teach the children Filipino, she said.

Her love of the language and desire to instill it in her children was sparked by a question asked in class by her former history professor, Milagros Guerrero.

“Who among you were taught to love your country by your parents? This was etched in my heart. That day on, my love is not just for God and my family but also for my country, and this [is shown by my] using the Filipino language,” Abiera said.

Abiera adheres to the general impression that student proficiency in Filipino has declined compared to last year. More students now are more into using English, she said.

Abiera said around 200 students were taking postgraduate and graduate courses in the Filipino department, relatively few compared to others in the College of Engineering or Science.

There are also around 20 international students, mostly from South Korea and Japan, who study Filipino in UP, said Filipino professor Ronel Laranjo.